Alright, That’s Enough. Biden Needs To Drop Out and Go See A Doctor. 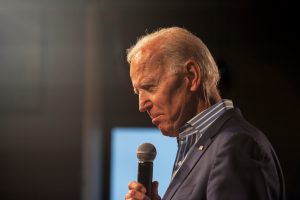 Whether it’s the fact that he’s a one-man gaffe machine, that he can’t seem to remember that we keep our hands to ourselves in polite society, or that his damn eyeball exploded on live television, there’s plenty of reason to be genuinely concerned about Joe Biden right now.

The latest couple of gaffes would be funny if the dude weren’t constantly making them. I mean, after a certain point, it all just stops being funny and you just want to see Biden, your fellow human being, get the medical attention he clearly needs.

Well, I mean, they’re still a little funny. You decide.

During a talk at the Workers’ Presidential Summit in Philadelphia, Biden said that his proposed $8,000 child tax credit would “put 720 million women back in the workforce.”

“You get a tax break for a racehorse. Why in God’s name couldn’t we provide an $8,000 tax credit for everybody who has childcare costs?” Biden said, according to the Washington Free Beacon. “It would put 720 million women back in the workforce. It would increase the GDP—to sound like a wonk here—by about eight-tenths of one percent. It would grow the economy.”

Despite a US population of only 330 million, Joe Biden says child tax credit would put 720 million women back into the workforce.

That’s like double the population of the US. pic.twitter.com/DgChhZRzFl

720 million. There are about 330 million people in the United States today, with about 168 million of them being women (not counting all the dudes who think they’re women and vice versa, of course). Unless Biden’s tax credit idea includes a snuck-in clause to allow for human cloning and create 552 million ladies and put them to work, I’m not sure what he’s talking about.

At another point during the event, run by the AFL-CIO, Biden apparently couldn’t remember just who it was he’d rallied with earlier this year in Boston.

“When I went up to the Rite Aid strike, I looked out in that parking lot when I was talking with the folks when I was walking the picket line, up in Boston — and what happened? I looked out there, and I’ll bet you 40 percent of the people there were non-union,” Biden said.

Except, as The Boston Globe clarifies, the rally Biden referred to was for the thousands of Stop & Shop workers who went on strike in April.

“Biden, who is now considered the frontrunner in the Democratic presidential primary, attended the boisterous rally in Boston after some 31,000 Stop & Shop workers, many of them part-timers, went on strike after months of negotiations between the company and their union failed to reach a new contract agreement,” The Boston Globe reported.

How ironic is it that after an entire political demographic who diagnosed President Trump with all manner of psychiatric disorders from the comfort of their keyboards (some with, some without actual degrees in psychiatry,) we’d get the chance to do the same with their favorite 2020 frontrunner?

Oddly enough, either out of genuine concern or out of cannibalistic fervor, the left is finally starting to turn on Biden for his gaffes and swiss-cheese memory.

“I think we are at a tough point right now, because there’s a lot of people concerned about Joe Biden’s ability to carry the ball all the way across the end line without fumbling. And I think that Castro had really legitimate concerns about can he be someone in a long grueling campaign … and has every right to call out,” Cory Booker said after the most recent presidential debate. “I think there were a lot of moments where a number of us were looking on the stage when he tends to go on sometimes. At one point, he was talking about communities like mine listening to record players. I don’t remember the last time I saw a record player … But there are definitely moments where you listen to Joe Biden and you just wonder …”

Booker’s comments came after Julian Castro went for the jugular on Medicare For All during the debate, asking Biden, “Are you forgetting already what you said just two minutes ago? I can’t believe that you said two minutes ago that they had to buy in, and now you’re saying they don’t have to — you’re forgetting that.”

And, of course, I’d be remiss in leaving out President Trump’s latest campaign video that offers the viewer a stunning array of Biden’s greatest gaffes in a two-minute spot.

Again, y’all, I want to laugh, but at this point I’m just concerned for the dude. Somebody do the man a solid and retire him, please!