Almost One Third Of Businesses In NY And NJ Have Shuttered 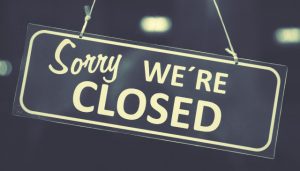 One of the tools that has been used over and over again this year, mostly by Democratic leadership, to try and slow or completely stop the spread of the coronavirus is that of lockdowns and business shutdowns.

Conservatives have attempted to warn people of the dire economic consequences of taking such action, but bleeding heart folks ruled by emotion have ignored them and as a result, one-third of businesses in New York and New Jersey have shuttered.

The national average, according to the database, is 29.8%.

“The figures are in line with estimates from the New Jersey Business & Industry Association, which says 28 percent of the Garden State’s small businesses had shut up shop by the end of October, according to the Star Ledger newspaper,” the outlet reported. “And with the region now seeing a resurgence of the virus, business leaders are worried the number could go even higher.”

Eileen Kean, New Jersey state director of the National Federation of Independent Businesses, told the Star Ledger that the situation was “really bad.”

“And without federal dollars coming into New Jersey, the Main Street stores and other establishments are not gonna make it through the winter,” she went on to say.

The question that the left doesn’t want to answer is why it is unacceptable that people die from coronavirus, but totally acceptable to destroy the lives of others through the loss of their ability to provide for their families?

Also, the Democratic Party doesn’t want to acknowledge the devastating toll lockdowns have taken on mental health either. Suicide rates across the country are exploding, but hey, those lives don’t mean as much as those being lost to COVID.

We all know the high-risk folks need to be protected. No one wants to see people ill and lose their lives to this illness. However, while it might be immoral to do nothing to help those who are high-risk, it’s just as immoral to utterly trash and destroy the lives of others who are not high-risk.

There must be a solution that is well balanced.