All the Best “Trump Grounds Pelosi” Memes in One Place. You’re Welcome. 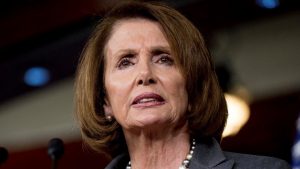 If you haven’t, that’s probably because you haven’t yet gotten used to the 5-second turnover for news stories, so let me fill ya in.

Yesterday, Trump sent a letter to Nancy Pelosi as she and other lawmakers were literally on their way to the airport to board a military jet to Europe, where they planned to visit Brussels, Afghanistan, and Egypt.

“Gee, that sounds like kind of a waste of taxpayer dollars in the middle of a government shutdown,” you might say.

Well, so did Trump—he cancelled the trip literally one hour before Pelosi and friends were planning to board the plane, helpfully suggesting she could fly commercial if she so wished.

Naturally, as the media orchestrates a mass meltdown, the internet has gone crazy with hilarious memes of grounded Pelosi, some of the best of which we’ve gathered here for your enjoyment.

It’s true, @speakerpelosi. Enjoy your time at home behind your wall. pic.twitter.com/CvWWU3pAoU

Live footage of Nancy Pelosi after finding out Trump grounded her flight pic.twitter.com/1RGKdzfiSA