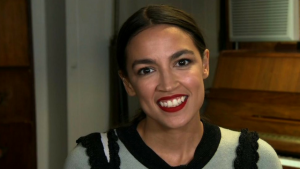 Alexandria Ocasio-Cortez has gone a few days without being in the news for saying something stupid, so she must have been wracking her brain on how to land her long, confusing name on among trending topics once again.

And she nailed it.

On Wednesday, ever the dramatic, bumper-sticker-slogan alarmist (points for consistency!), she claimed that GLOBAL WARMING IS COMING AND KILLING US ALL.

Our children’s lives are on the line.

Not a single elected official, Democrat OR Republican, should accept money from fossil fuel corporations.

Americans are dying because of a government too coward to save the planet.

It’s wrong.
And we will need a Green New Deal to survive. https://t.co/Fh7X0EjFIZ

“Americans are dying because the government is too coward to save the planet,” people! We must act now!

With lots and lots of authoritarianism. #Ocasio2018

I wonder if the people dying are the same people who are getting unemployment numbers down by working two jobs?

Because each of these claims seem equally fabricated and…ridiculous.

It’s fun to laugh, but in reality, her tweet is incredibly telling. It has nothing to do with global warming or climate change or saving the whales, and everything to do with what will likely be the most effective way to implement the kind of policies Ocasio-Cortez and her progressive cohorts want to see: the green agenda.

The words “Green New Deal” should definitely scare you, even though it’s pretty laughable to think of Ocasio-Cortez actually being able to do anything in Washington other than give us beautiful little sound bites and foolish snippets like this one.

Unfortunately, she’s not the only person talking about high taxation, regulation, and a resource-based economy that could dramatically change the global economy more than it has ever been done so before.

Ocasio-Cortez is hilariously idiotic, but she’s also speaking for people much more powerful and much more sinister than she is. Americans are not dying from global warming, anyone with half a brain can tell you that. But they’re definitely not going to stop trying to convince us they are.