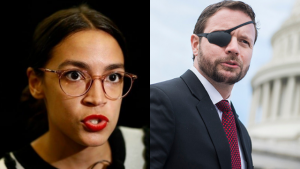 Dan Crenshaw and Alexandria Ocasio-Cortez have become my two favorite Congresspeople to write about this year.

Crenshaw, because he’s awesome, and AOC, because while her policy proposals are the stuff of Orwellian nightmares, she’s also hilariously dumb.

So when a clever Crenshaw tweet collided with AOC’s naval-gazing inability to get a joke this week, it was a beautiful thing.

On Sunday, after the Patriot’s historic sixth Superbowl win, Crenshaw jokingly suggested that maybe they should get taxed at 70% to make up for their dominance in the league.

Should someone propose a 70% tax on the Patriots so that NFL competition is more fair and equal? Asking for a friend.

“Should someone propose a 70% tax on the Patriots so that NFL competition is more fair and equal? Asking for a friend,” the Texas Rep tweeted.

“The average NFL salary is $2.1 million, so most players would never experience a 70% rate,” she lectured.

“The owners who refuse to hire Kaepernick would, though,” she added.

The average NFL salary is $2.1 million, so most players would never experience a 70% rate.

The owners who refuse to hire Kaepernick would, though. https://t.co/AnST2lCiU9

This girl is too much.

The fact that she missed Crenshaw’s joke is pretty telling, really, beyond just the initial silliness that she quite literally can’t take a joke.

Crenshaw was casting light on the fact that the Patriots are victorious not because they are white, or wealthy, or their mama loved them more, or the government gave them bigger tax cuts, but because they have enormous talent, arguably the best quarterback the league has ever seen, and train really, really hard.

The wealthy households that AOC wants to tax also happen to often have accumulated their wealth through hard work, sheer talent, brilliant minds, and enormous self-discipline.

The ability to accumulate wealth, like athletic ability, is simply not equal, and never will be, and taxing the biggest producers and the hardest workers in our country at enormously high rates simply inhibits their ability to continue to produce the products and services that make life in America better than anywhere else on earth.

Here’s a big difference though: while the Patriots won the Superbowl while all other teams in the NFL go home empty-handed when the wealthiest people in our country do well, we all do well. They create jobs, put wealth into our economy, and support a smaller business.

In essence, they help the little guy.

AOC doesn’t get this any more than she gets Crenshaw’s jokes, unfortunately, proving there is not only inequality in the ability to accumulate wealth in our country, but an inability to comprehend basic economic policy in Congress.