Alec Baldwin Jokes About Running In 2020, But He Might Actually Be Perfect For It 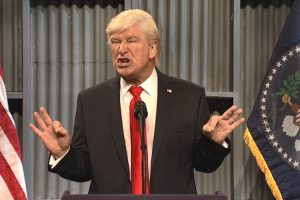 Alright, people, this whole 2020 presidential race is getting out of hand.

Assorted leftists of every stripe have grown so fed up with being governed by “Literally Hitler” that they’ll settle for “Literally A Marginally Toilet-Trained Chimp” if it means just having that mean old orange man out of the Oval Office.

It seems as though just about everyone is planning, mulling, or joking about taking a shot at the big show, and it’s just getting plain ridiculous.

SNL star Alec Baldwin took to Twitter to do a little market research and suggest, whether in jest or not, that it would be “so easy” for him to waltz into the world of government and campaigning and run the gauntlet to beat Trump.

Since Baldwin’s political and government history looks a little thin, let’s add massive ego to his list of qualifications for the office of President.

“I won’t ask you for any [money],” Baldwin added. Not even an official candidate yet, already making made-to-break campaign promises. That one made me dang near spit out my coffee, laughing, which is something his entertainment offerings haven’t done since The Departed.

An old tweet, for sure, but very telling of the sort of campaign we could expect to see from big brother Baldwin. What better way to garner support than to drag voters who weren’t alive for—let alone complicit in—the nation’s “sins” on one big ol’ guilt trip and then pin every single one of them on the Orange Man.

You know what? Maybe Baldwin isn’t such a bad candidate after all. He’s already showing he’s got what it takes to rise to the top of the party, sell billions of bumper stickers that will ultimately become a source of shame, possibly steal an election from a crazy-haired socialist elitist, and then faceplant when the people of America demonstrate that they’re still nowhere near ready to trust the Dem establishment again and vote Trump in for a second term.

Somebody hook this guy up with the DNC.