Alaska Gov. Dunleavy Responds To Trump’s One Condition For Endorsement 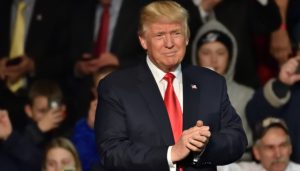 Former President Donald Trump has revealed that Alaska Gov. Mike Dunleavy has accepted his endorsement, which included a condition of not throwing support behind the reelection of Sen. Lisa Murkowski.

On Tuesday, Trump endorsed Dunleavy, who is currently running for reelection as the governor, under the condition that he wouldn’t back Murkowski, who is 1 out of 7 Republican senators who voted in favor of impeaching Trump after he was accused of inciting the Jan. 6 attack on the Capitol.

“This is why Mike Dunleavy of Alaska has been, and will be, a great Governor,” Trump said in a tweet posted by spokeswoman Liz Harrington. “He has the courage of his convictions. Lisa Murkowski is the ‘disaster from Alaska’ who single-handedly blew [Arctic National Wildlife Refuge], one of the largest energy sites in the world, and … an incredible economic development opportunity for the Great State of Alaska!”

Under the former president’s remarks was a “note” attributed to Dunleavy, The Hill reported.

Inside Elections reporter Jacob Rubashkin tweeted Trump’s statement and Dunleavy’s note, adding, “Unclear if Alaska Gov. Mike Dunleavy meant for this note to Trump, promising he won’t endorse Lisa Murkowski, to be public — but it is now!”

Trump issued a statement Tuesday announcing his endorsement of Dunleavy.

“Alaska needs Mike Dunleavy as Governor now more than ever,” Trump remarked. “He has my Complete and Total Endorsement but, this endorsement is subject to his non-endorsement of Senator Lisa Murkowski who has been very bad for Alaska.”

“In other words, if Mike endorses her, which is his prerogative, my endorsement of him is null and void, and of no further force or effect!” Trump added.