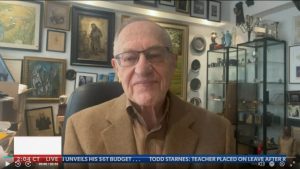 Many of the critics of Kyle Rittenhouse have stated that the now 18-year-old should not have been at the Black Lives Matter “protest” (which was really a riot) with a weapon, however law professor Alan Dershowitz stated in a recent chat on Newsmax that Rittenhouse had every right to be there and that if he hadn’t been armed he would “probably be dead.”

Rittenhouse is currently on trial for killing two men and wounding a third during all of the chaos that went down in Kenosha, Wisconsin when he was only 17-years-old. He went on to reveal that his purpose for being there was to provide medical aid and to put out fires.

“If he hadn’t gone there with a gun, he’d probably be dead,” Dershowitz stated during a conversation Thursday on “Spicer & Co.” “He went there with a gun because violence was threatened.”

It would be better if nobody brought guns to protests, and everybody just used their voices, Dershowitz told hosts Sean Spicer and Lyndsay Keith. “But that’s not the reality in which many from Black Lives Matter operate,” he said.

Much of how the verdict is rendered will depend on the judge’s jury instructions, Dershowitz predicted, noting that in such cases, they are often difficult.

But Rittenhouse was smart in taking the stand, especially since he doesn’t have a long criminal record.

“This is not a case that’s going to be determined by the forensics alone,” he went on to say. “The jury is going to have to look him in the eye and say, ‘Do we believe he was scared?’ The fact that he broke down on the witness stand, even though a basketball player mocked him for that, it seemed genuine to me. It seemed authentic and if it’s seen as genuine by the jury it will have an impact.”