Al Sharpton Not A Fan Of Defunding Police, Says It’s Something A ‘Latte Liberal’ Might Like, But ‘Proper Policing’ Still Necessary 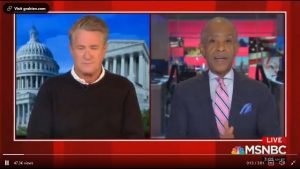 You know 2020 is absolutely off the charts insane when race baiter Al Sharpton actually says something that you end up agreeing with. Truly, it seems the end is nigh.

Apparently Sharpton is not at all a fan of the whole “defund the police” movement that has been sweeping the country and seems to be a big hit with Black Lives Matter folk. Then again, given their propensity to burn neighborhoods to ash and steal stuff from local businesses, guess it’s understandable why they want less cops around.

However, Sharpton stated that defunding the NYPD is something a “latte liberal” might support, but “people on the ground need proper policing.”

He’s actually right on this one.

“Morning Joe” namesake Joe Scarborough asked Sharpton about the crime in his native New York City, which has seen a surge in shootings during the coronavirus pandemic.

“We’ve always heard about the tale of two cities. On the side of the city that I come from, which is Blacker and poorer, we’ve seen more in terms of gun usage. I got a lot of attention when I did the eulogy for George Floyd’s funeral, but I also, a month later, preached a 1-year-old kid’s funeral in Brooklyn who was killed by a stray bullet,” Sharpton said.

Sharpton: Defunding the NYPD is "something a Latte Liberal may go for as they sit around the Hamptons discussing this as an academic problem. But people living on the ground need proper policing." pic.twitter.com/TkXnVgUBEq

“Six people were shot over Labor Day weekend at a festivity in Brooklyn, so I would say statistically we’re not much higher than where we were, but on the ground it is certainly feeling more violent, feeling more unsafe in unsafe communities,” Sharpton added.

Scarborough then brought up the whole “defund the police” movement, which came about as the result of the officer-involved death of George Floyd out of Minneapolis, stating that some people feel that doing this would negatively impact minorities and those who live in unsafe neighborhoods.

“We need to re-imagine how we do policing, but … to take all policing off is something a latte liberal may go for as they sit around the Hamptons discussing this as an academic problem. But people living on the ground need proper policing,” Sharpton replied.

This is right on the money. Some departments may need to clean up their acts, but cops as a whole, for the most part, are good people doing their best to try and keep communities safe so we as citizens can thrive.

Let’s hope that this movement dies out and common sense prevails.