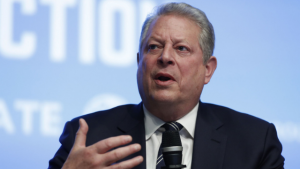 The man who has been wandering over the countryside since losing the 2000 election, rambling about climate change and nature walks through the Book of Revelation to anyone who will listen.

Naturally, in the midst of historic flooding hitting the Carolinas by way of Hurricane Florence, he appeared at some climate alarmist symposium or something in San Francisco to milk the natural disaster for all it was worth.

That is to say, to ride on its back to pontificate about the importance of authoritarian energy restrictions and overplay the supposed man-made causes of climate change.

Unfortunately, he went a bit far and ended up making a claim that was far beyond the usual hyped-up rhetoric of climate alarmists and was, pretty much, downright false.

Gore said on Friday that two major storms in the Atlantic and Pacific oceans had never hit at the same time (a “super typhoon” named Mangkhut hit the Philippines over the weekend).

“This is the first time in history that two major storms are making landfall from the Atlantic and the Pacific simultaneously,” Gore told the crowd at the Global Climate Action Summit in San Francisco. Gore (who’s not a climatologist but plays one when delivering paid speeches) said the two storms show that climate change is producing extreme weather.

“Even without the cyclonic storms, we’re putting so much heat into the oceans. We’re using the sky as an open sewer,” Gore said. “This is literally insane.”

He also managed to use the word “literally” wrong, unless he means to include himself among those, presumably the entire population of earth, that is literally insane.

While still anecdotal at best, this would certainly be a noteworthy observation of extreme weather…were it even true. Unfortunately for Gore, it wasn’t, as someone who has actually gone to school and received a degree in meteorology soon told him:

“Al Gore just (fraudulently) claimed without any evidence that we’ve never had hurricanes in both the Atlantic and Pacific making landfall at same time. #GCAS2018 Apparently read fact from the botched NBC News article,” [meterologist Ryan] Maue wrote on Twitter.

Maue said the NBC article “completely missed the mark on ongoing hurricanes and their rarity,” the Daily Caller reported.

“University of Colorado Boulder meteorologist Roger A. Pielke Sr. also took issue with the claim by Mr. Gore, known for his 2006 climate-change film, An Inconvenient Truth, and the 2017 follow-up, An Inconvenient Sequel,” The Washington Times reported.

“Such statements show that he is not familiar with the history of tropical cyclone landfalls,” said Mr. Pielke in an email.

I’d say Gore should stick to his day job, but getting paid gobs of money to make overblown claims about the environment seems to be his day job, so…maybe he should just start with reading newspaper articles a little more carefully.