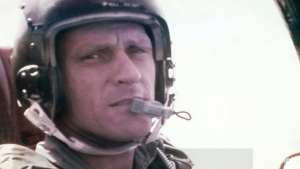 In the middle of one of the most miserable times to be an American (that is, in the post-shooting news cycle ahead of the gun-grabbing Democratic primaries), we’ve been gifted with a little reprieve in the form of an incredible story of sacrifice.

Boy, did we need this.

According to USA Today, when Air Force Maj. Roy Knight, Jr., left his Dallas home to serve in Vietnam more than half a century ago, his then-5-year-old son, Bryan, came to Dallas Love Field to see him off.

Knight, born in Garner, Texas, didn’t know that he wouldn’t be seeing Bryan again after that heartwrenching “goodbye” moment so many American families have lived through.

Knight was just 36 when he was shot down while attacking a target on the Ho Chi Minh trail in Laos on May 19, 1967, according to White’s Funeral Home in Weatherford, Texas. He was leading a flight of two aircraft on a strike mission when he was hit by anti-aircraft fire, according to the Defense POW/MIA Account Agency.

“No parachute was observed prior to the aircraft crashing and bursting into flames,” the agency says. “Additionally, no beeper signals were heard. While search and rescue efforts were initiated, an organized search could not be conducted due to intensity of hostile ground fire in the area.”

Knight, officially listed as MIA, was declared deceased in September 1974. At that point, his son Bryan was just 12 years old.

Although that’s where many stories of American lives lost in Vietnam end, that’s not the end of Knight’s story by a long shot.

“In 1991 and 1992, almost 20 years after the end of the Vietnam war, joint U.S.-Laos teams investigated a crash site allegedly associated with Knight’s loss, recommending it for excavation,” USA Today explained. “From 1994, the site was examined five times.” Fast-forward to this year, when a joint team recovered possible human remains and life support items that led to the identification of Knight’s remains.

At long last, Col. Roy Knight was coming home and—if you can believe it—his son Bryan, now a pilot himself, had the high honor of flying Knight home himself to the same Dallas airport where they said goodbye all those years ago.

“On Thursday, at the airport, hundreds of crew members, onlookers, friends, and military personnel, gathered on the tarmac, according to a livestream by WFAA on its Facebook page. Some brushed away tears, many had their hand over their heart,” USA Today continues.

“Two fire trucks sprayed an arc of water over the Southwest airlines plane, which brought the remains home on the last leg from Oakland, as it rolled slowly to the terminal.”

Southwest Airlines Captain Bryan Knight flew his father back home to Dallas Love Field for the final time more than 50 years after he was killed in action during the Vietnam War in 1967. (Photo: Ashlee D. Smith, Southwest Airlines)

The incredible event went viral after Jackson Proskow, Washington bureau chief for Canada’s Global News, happened to be on a layover from El Paso to Washington on Thursday when he witnessed the ceremonious event and shared it with the world.

In a handful of tweets, Proskow reported that the Dallas Love Field terminal came to a standstill:

I’m at the airport in Dallas, waiting for my flight home to DC from El Paso, and something incredible is happening.

“Airports rarely see moments of quiet — but for a few brief minutes, Dallas Love Field fell absolutely silent,” Proskow wrote of the incident later on. “There were no garbled announcements, no clickity-clack of rolling suitcases over the tile floor, no shouting over cell phones. People stood quietly at the window, wiping away tears, taking in a moment few rarely get to see.”

“It was peaceful, it was beautiful and it was a privilege to watch.”

Southwest Airlines Captain Bryan Knight flew his father back home to Dallas Love Field for the final time more than 50 years after he was killed in action during the Vietnam War in 1967. (Photo: Rich Matthews, Southwest Airlines)

“One cannot fathom what it must be like to wait half a century for closure, or what this moment must have been like for his family,” Proskow continued. “Sadly, some would not be there to see the homecoming. According to his obit, his wife Patricia — ‘the love of his life’ — passed away in 2008. His own parents died within three years of his disappearance.”

“We are so fortunate that they decided to share this moment with us, especially in a week when we could all use a little more hope.​”