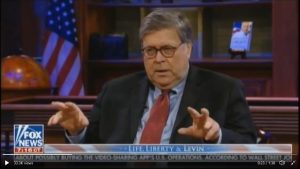 Attorney General Bill Barr is the kind of guy who isn’t afraid to tell you the unvarnished truth, a character trait that makes him absolutely perfect for his role in the Trump administration.

Barr recently conducted an interview with Mark Levin for his Fox News program on Sunday where he stated that the mainstream media is lying to the American public about the far-left violence that has erupted on the streets of America over the last several months.

“We have the citizen reporters, who have these videos of these events, which are quite different than what we get a lot of times from the media, which seems to be censoring the violence,” Levin said to Barr. “No?”

“Absolutely. Their narrative – they are projecting a narrative,” Barr said. “When the word narrative came into currency, I knew we were in trouble, because the word narrative really suggests that there’s no objective truth. There’s no real story of what happened, it’s just everyone has their own narrative.”

“And you get to then – the press can justify presenting a story that doesn’t really correspond to objective truth, but it’s our narrative. We have a narrative, you have a narrative,” Barr continued. “I’ve been appalled at — on this violence, because it’s happening right out in the streets, anyone with eyes can see what’s happening. They see the violence.”

Barr finished up by saying, “And yet you hear about these peaceful demonstrators. So it’s just – it’s a lie. The American people are being told a lie by the media.”

AG Barr on the violent Left who throw rocks at police: "You don't see it on any of the national news. You don’t see it on the networks… [or] on the other cable stations… [Y]ou hear about these peaceful demonstrators… The American people are being told a lie by the media.” pic.twitter.com/3jeiqrzdJa

The mainstream media knows full well that the vast majority of the violence, looting, and rioting is being carried out by folks on the left, whether as part of the Black Lives Matter movement or extremist group Antifa. This is precisely why they are working around the clock to sanitize the destruction and call it all “peaceful protests.”

Leftists love the chaos and division. It helps foster an anti-Trump narrative they can use to help bolster Joe Biden’s chances of defeating the president come election time in November. That’s the plan. They will do whatever it takes to accomplish it, including lie.

Here’s to hoping they fail miserably.