After Publisher Nixes Dr. Seuss Books For ‘Racist’ Imagery, They Rocket To The Top Of Amazon Bestseller List 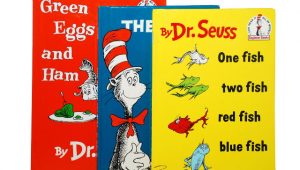 More than a dozen Dr. Seuss books are now sitting at the top of the Amazon bestseller list after the main publisher of the books decided to stop producing the books over concerns that some of the contain “offensive” and “racist” imagery.

On Tuesday, 13 titles from the legendary children’s author sat at the top of the top 20 bestselling books list.

Dr. Seuss Enterprises, the company that publishes books written by author Theodor Seuss “Ted” Geisel, announced Tuesday that it would no longer produce several Dr. Seuss titles because the books “portray people in ways that are hurtful and wrong.”

The company said it has listened to concerns from readers over the years who have expressed concern that some monkey-like characters in If I Ran the Zoo and a Chinese character in And to Think That I Saw It On Mulberry Street were too offensive to print.

The run on Dr. Seuss books also caused a surge in pricing on Amazon and on eBay, where some of his writings now cost between $5,000 and $20,000.

Much of the support is coming from conservatives who have taken issue with the publisher’s decision to drop the books, stating that this just another example of cancel culture.

They are right. It is cancel culture.

We can clearly enjoy these books while acknowledging some of the material might be problematic. In fact, that material, if it actually is offensive, provides parents with the perfect opportunity to teach children why it’s unacceptable and why it was once considered okay to include such depictions.

Learn from the past, don’t erase it.