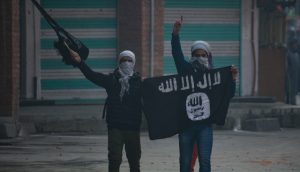 Some of the Afghan citizens who helped the United States military during the war in Afghanistan are now being forced to join up with the Islamic State-Khorasan Province (ISIS-K) after they were abandoned by President Joe Biden and his administration during the troop withdrawal from the country.

A report from the Wall Street Journal stated that many of these individuals turned to ISIS-K because they did not have a suitable income to live on and were being hunted down by members of the Taliban, who took over the country as we were pulling out.

“The number of defectors joining the terrorist group is relatively small, but growing, according to Taliban leaders, former Afghan republic security officials and people who know the defectors. Importantly, these new recruits bring to Islamic State critical expertise in intelligence-gathering and warfare techniques, potentially strengthening the extremist organization’s ability to contest Taliban supremacy,” the Journal stated in its report.

One of those who joined was an Afghan national army officer who previously “commanded the military’s weapons and ammunition depot in Gardez, the capital of southeastern Paktia province,” the outlet reported. That army officer was killed during a battle with the Taliban last week.

A former official told the outlet that several other members of Afghan’s former intelligence and military joined ISIS-K after the Taliban raided their homes “and demanded that they present themselves to the country’s new authorities,” the Journal added.

Rahmatullah Nabil, former head of Afghanistan’s National Directorate of Security, told the outlet that “In some areas, ISIS has become very attractive” to Afghan military “who have been left behind.”

“If there were a resistance, they would have joined the resistance.” He went on to say. “[But], For the time being, ISIS is the only other armed group.”

“Colin Kahl, undersecretary of defense for policy, told the Senate Armed Service Committee last week that the U.S. intelligence community determined ISIS-K could be ready to attack the West in 6 months to a year and that al-Qaeda could be ready for such an attack in one to two years. ISIS-K is an acronym for the Islamic State’s Afghanistan branch,” the Daily Wire said.

“We could see ISIS-K generate that capability in somewhere between six or 12 months, according to current assessments [from the intelligence community],” Kahl went on to say, according to the report in the Wall Street Journal. “And for al Qaeda, it would take a year or two to reconstitute that capability. We have to remain vigilant against that possibility.”

Khal then went on to inform lawmakers last week that the United States, at this time, cannot determine whether or not the Taliban would be able to counter an attack launched by ISIS-K.

“It is our assessment that the Taliban and ISIS-K are mortal enemies. So, the Taliban is highly motivated to go after ISIS-K. Their ability to do so, I think, is to be determined,” Kahl went on to say.

It’s tragic that these folks are having to do this, all because Biden wanted to try and look good for political purposes. It’s ridiculous.

We all know this was a move likely done on purpose to help push along the progressive agenda that radical leftists have no only for our nation, but the entire globe.