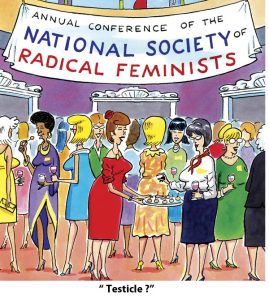 This article is written in recognition of Merriam-Webster dictionary declaring “feminism” as its word of the year for 2017.

If some of you are having a hard time finding a date or a mate, the problem may be in your “allyship”! Some of the more radical feminist are advocating that women should seek “allyship” and “accomplices” type relationships in order to fight against white supremacy, queerphobia, and misogyny.

(According to the anti-oppression network, Allyship, which is a take-off on the word “ally”,  is defined as an active, consistent, and arduous practice of unlearning and re-evaluating, in which a person in a position of privilege and power seeks to operate in solidarity with a marginalized group.)

Last week, feminist Lara Witt compiled a list of ten questions every Good Feminist should ask on a first date.

Witt says she has no time to date anyone who does not support “marginalized folks.”

“As a queer femme of color, I keep close relationships with people who go beyond allyship; they’re true accomplices in the fight against white supremacy,( in a Tweet in March, Lara Witt claimed whiteness was evil) queerphobia, and misogyny. If you’re not going to support marginalized folks, then we can’t be friends, let alone date,” she says. “The personal is political.”

Witt claims “feminists also date,  but there are questions we have to ask before we get close to someone.”

Cutting right to the chase, Witt sails into and beyond allyship and suggests feminists ask their date, who could be male, female, transgender, bisexual, or even identify as a chandelier, their feelings on Black Lives Matter, the BDS movement,  “undocumented” immigrants, Muslims, capitalism, and disabled allyship. (To clarify the chandelier reference, Amanda Liberty, 33, of the UK, said she proposed to her favorite light fixture on Valentine’s Day while continuing an open relationship with the rest of her collection of 25 chandeliers. Amanda, who identifies as objectum sexual (OS), said her first love was a drum set at 14 years old.)

Back to the Allyship/Accomplices dating challenge, here’s the list:

Without question, becoming a radical feminist makes a woman less marriageable, more crass and generally just unpleasant to be around.

Radical feminist who have embraced The Declaration of Feminism are out to abolish marriage as it has existed in the Western world. One of the articles in The Declaration of Feminism declares, “Marriage has existed for the benefit of men and has been a legally sanctioned method of control over women. The end of the institution of marriage is a necessary condition for the liberation of women.”

Thank God I will not have to sharpen my “allyship” skills to find a date or a mate!

Matt Walsh is correct when he states, “No man dreams of the day when he might marry a masculine, independent woman and raise a feminine boy and a non-binary daughter who can share clothes and nail polish.”

Matt agrees with Ms. Witt in that we men should “put our cards on the table from the beginning and make our intentions known. You are a man who wants to be a man. You want a woman who wants to be a woman. If she does not fall into that category, abandon ship. There are graceful, feminine, womanly women out there. I found one. You can, too. You may just have to be a little more intentional and direct in your pursuit.”

In spite of the all out assault on marriage and family, may I assure you that it has a great, good, grand, and glorious future, because Heaven will help the Home! If you are looking for a date and potential mate, or if you are in a marriage that is average or awful, the potential is awesome if you turn the keys of your heart and home over to the Master Builder, the carpenter from Nazareth – the Lord Jesus Christ!