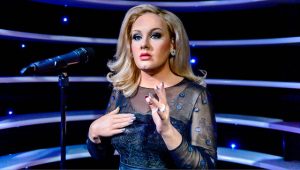 Grammy-winning singer Adele is now coming under fire as a “transphobe” for daring to say that she “loves being a woman” as she accepted an award during the now gender-neutral Brit Awards show.

“I understand why the name of this award has changed, but I love being a woman and being a female artist — I do! I’m really proud of us, I really, really am,” Adele stated during her acceptance speech, according to Newsweek.

And that’s when liberals opened the floodgates and started calling her transphobic.

Here’s more from the Newsmax report:

Critics slammed Adele on social media, with one Twitter user describing her as a “transphobe” who used her platform “to call for the destruction of the trans community. Especially the confused teenagers,” and another calling her a TERF (trans-exclusionary radical feminist).

“Please, no, ADELE can’t be a TERF,” the viewer stated about the singer’s comment, according to Newsweek. “That last comment, though ambiguous, could be perceived as TERF-y. Please no.”

While Adele faced a fair share of backlash, her remarks also garnered widespread support from fans as well as teacher Debbie Hayton, who in an op-ed for The Spectator wrote that women like Adele, and JK Rowling, “have been pursued and persecuted mercilessly, simply for standing up for their sex.”

“I said women deliberately,” Hayton added. “Whatever the thought police might want us to believe, they certainly know the difference between men and women when they unleash their attacks.”

She then noted that with all of the pressure coming down on Adele, she might be tempted to issue an apology, however, she should stand firm instead.

“Adele’s message to women and girls was inspirational. Here was a woman — who has sold tens of millions of albums — telling the world she was proud to be a woman. That’s something to celebrate, not condemn,” Hayton went on to write, later going on to add that young girls need to have role models and Adele “stepped up to the plate.”

“For that, she deserves applause, even greater than the adulation she received for her music,” she stated in conclusion.