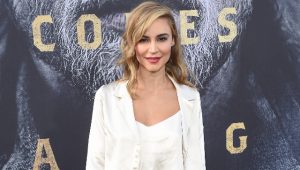 Actress Samaire Armstrong, mostly known from her role in the smash television series “The O.C.,” released a video this week revealing that she would be heading to the polls to vote for President Trump this November.

In her video, she makes it clear that the chaos sweeping the nation from Black Lives Matter and other organizations are “not what she signed up for,” and that her coming out in support of the president will be “at the cost of everything.”

Probably a true statement given how much it is forbidden to be a conservative in Hollywood.

In a video posted to Instagram on Thursday, Armstrong, who identifies as an Independent, laid out why she’s voting Trump this election, hitting the mainstream media for their divisive false-narrative pushing and slamming Democrats for using identity politics to manipulate people and rip away freedoms from the populace.

“I’m voting #Trump2020, and this is why,” the actress captioned the video post. “This is MY opinion. I am sharing it with you at the cost of everything, because it is my right. It is your right to refute it.”

“What I hope comes from this, is that we are able to have an open dialogue,” Armstrong wrote. “There are many thoughts and insight you may want to interject and provide. I encourage you to have factual data to support what your point is.

“There are so many in our great country who have been bullied into silence at the doing of a far left mob. Let’s shift back to reality and facts. Let’s stop placating to the emotionally undeveloped, who have an inability to process the meaning of personal responsibility, as if they are the cultural guide of which we should follow. I encourage us all to stay grounded in these discussions. I am well aware how emotional and important what we are discussing is.”

“You can see in my video how passionate I am,” the actress said. “I ask you to consider, why I would be coming out saying these things. How is it that I feel so confident about putting my ‘divisive’ perspective in public. I am willing to gamble with what comes of my opinion, because I have conviction of its validity.”

“If nothing else, I hope this encourages you to speak YOUR opinion, no matter how unpopular it may be,” Armstrong continued. “Freedom of speech must be restored. Logic must be restored. Critical thinking must be restored. I have deep love for everyone of my fellow humans. Every race, color, creed, gender, political back ground, religious back ground, financial background, must have their OWN voice and opinion, and it MUST be allowed to [be] spoken.”

How long will it take the crazies in Hollywood to start coming after her? She’s probably already been blacklisted by every major studio in Hollywood after this video was published. The left claims to be tolerant and open-minded, but they aren’t.

Hopefully, Armstrong continues to stand strong on her convictions.