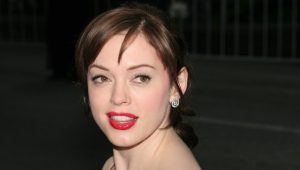 Larry Elder, powerhouse conservative radio host and current Republican candidate for California governor, has added yet another celebrity name to the list of folks who have endorsed him for the position.

It’s been reported previously that Elder has a few famous folks on his side as he heads into the recall election, which is to be held on September 14, including Clint Eastwood and Chuck Norris. However, most of the brain dead folks working in the entertainment industry have opted to support Gavin Newsom, the current governor.

“Comedian George Lopez, singer John Legend, actors Mark Ruffalo and Elijah Wood, and directors Rob Reiner, Steven Spielberg, and J.J. Abrams are just a few of the Hollywood heavy-hitters who have either endorsed Newsom or donated money to his campaign,” the Daily Wire reports.

McGowan hopes to lend some of her own star power to Elder in the closing days of the race.

The actress began her speech at the Luxe Hotel Sunset Boulevard in Los Angeles on Sunday by saying, she “finally came to a point” where she realized she was not a Democrat. “Everyone who has harassed, stalked, and stolen from me in my time in Hollywood has been a Democrat,” she said, adding, “This is not a country or a state for everyone. This is a country for the few.”

McGowan then revealed that she became familiar with Elder through his radio show, saying, “I used to listen to Larry Elder after I’d drive home from the set. Sometimes I’d even pull over and use a fake name, usually Tracy, to call in. And from him, I learned about the corruption of the teachers union in this state.”

The actress went on to describe Democrats as being “cult leaders” who “keep you in fear, they keep you in doubt.” In contrast, McGowan then said she believes Elder to be the right candidate for the job because she “[knows] his mind.”

The 48-year-old then went on to ask the crowd a question: “Why not change? Why not go big? Why not put a stake in the heart of evil? Because that’s what this really is. This is good and this is evil.”

McGowan then made the official endorsement of Elder, stating while she may not agree with the conservative radio host on every issue, “he’s a better man and the better candidate.”

“My money’s on Elder,” she said in conclusion, “I really appreciate anybody watching or reading this to think differently. To be brave. Do something that’s weird. Like maybe voting Republican, even though it will feel strange.”

During her appearance, McGowan also reiterated claims she made on podcast host Dave Rubin’s show last week that Newsom’s wife, Jennifer Siebel Newsom, called her before a 2017 New York Times report on movie mogul Harvey Weinstein’s abuse scandal, offering McGowan a bribe to if she would help suppress the story.

Siebel Newsom, of course, denied these accusations in a statement she gave to Insider, saying, “It’s disappointing but not surprising to see political opponents launch these false attacks just days before the election. Their limited correspondence has been strictly as fellow survivors of sexual assault and in Jennifer’s former capacity leading the Representation Project, an organization that fights limiting gender stereotypes and norms.”

Elder himself has stated that he’s not 100 percent sure that McGowan’s claims are true, but he stated that McGown has produced emails from the current governor’s wife which do establish that the two of them did have some kind of correspondence.