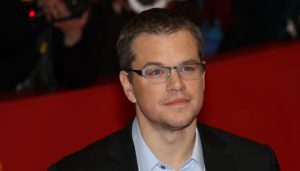 Award winning actor Matt Damon is catching all kinds of heat and criticism after he admitted he only recently stopped referring to gay men as the “f-slur.”

Damon made this confession during an interview he did with the Sunday Times, while taking an opportunity to explain his views on the “evolution” of “modern masculinity.”

“The word that my daughter calls the ‘f-slur for a homosexual’ was commonly used when I was a kid, with a different application,” the “Stillwater” star went on to say during the conversation.

Damon then explained that he had a recent confrontation with his daughter after he used ther term, saying, “I made a joke, months ago, and got a treatise from my daughter. She left the table. I said, ‘Come on, that’s a joke! I say it in the movie Stuck on You!’ She went to her room and wrote a very long, beautiful treatise on how that word is dangerous. I said, ‘I retire the f-slur!’ I understood.”

The outlet seemed to realize it had a potential scandal on its hands, writing that Damon’s comment is “exactly the sort of anecdote people make headlines about.”

Using song lyrics as an analogy for the broader framework of an interview, writer Jonathan Dean pointed out to Damon the kind of trouble an off-hand comment can cause celebrities these days. “Twenty years ago, the best way I can put it is that the journalist listened to the music more than the lyrics,” Dean said, “your lyrics are getting parsed, to pull them out of context and get the best headline possible.”

Damon agreed, placing the blame on click-bait reporting, but also saying some good may have come from the development. “Everyone needs clicks. Before it didn’t really matter what I said, because it didn’t make the news. But maybe this shift is a good thing. So I shut the f— up more.”

Despite the fact Damon admitted to using the word and announced his plans to stop using it, leftists still attacked him. Because nothing is ever good enough for these folks.

“I have ranch dressing that has been in my fridge longer than Matt Damon has NOT been using a homophobic slur and he somehow thinks he deserves praise for this Herculean effort,” Democratic Michigan House Rep. Laurie Pohutsky stated in response to the story.

“This news bit about Matt Damon only recently deciding to stop saying “f****t” after his daughter wrote him a ‘treatise’ on it just makes me sad. Geez,” LGBTQ activist Charlotte Clymer tweeted, going on to add, “This is the kind of thing forces me to wonder how much homophobic and transphobic sh** ‘progressive’ white cis straight men say behind our backs, and that just really sucks.”

Filmmaker Travon Free blasted Damon saying, “So Matt Damon just figured out ‘months ago,’ by way of a ‘treatise’ from a child, that he’s not supposed to say the word f*ggot. Months ago. Months ago.”