Actor John Cusak Goes Off the Deep End, Calls For Coup Against Trump in Twitter Rant 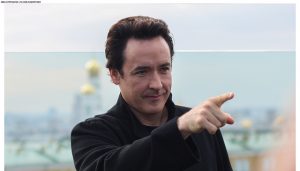 Actor John Cusak seems to have completely lost his mind during a recent Twitter rant, calling President Trump “ill, deranged and dangerous” and then, true to progressive form, compared him to a Nazi.

All of this is hilariously ironic coming from a man who likely supports abortion and promotes a political philosophy responsible for the murder of millions of people.

Anyway, it appears Cusak went off his meds for the day and now everyone knows just how wackadoo he really is. See for yourself.

“Let’s go to streets -Who owns the streets? Civil disobedience,” posted Cusack. “Require the government to leave if you are not satisfied with it. We need to kick Trump out of the office now He’s ill, deranged and dangerous. He’s putting children in cages – f**k the Nazi s- shut them down.”

Cusack continued to call for Trump’s removal and accused the current administration of placing illegal immigrant children in cages at the South border. Cusack was likely referencing photos taken during the Obama Administration that were wrongly credited to Trump by the media, last week. As noted by Daily Wire Editor-in-Chief Ben Shapiro, it is Democrats and leftist judges who have said that children cannot be detained, meaning kids are being ripped from their parents when the government enforces the law concerning illegal border crossings.

There has always been two tracts the political and legal – mueller on it-
Political track -gotta vote out the death kult and every single enabler –
And We gotta shut down trump – scare the shit out of them – get children out of cages https://t.co/ihuZtdzdJD

CELEBRITY FASCIST
A disease to be eradicated by any means, an ultra-corrupted state of mind : the fascist believes money & status will always allow him to get away with being an asshole and a criminal. And thus children get locked up in kennels at wall mart –
Hit the streets

Doesn’t this rant come off sort of like the thing you expect to see from one of those crazed people wearing sandwich boards and claiming it’s the end of the world? You know, mentally disturbed individuals?

Perhaps it’s time for Cusak to unplug and go for a nice, long walk or something.