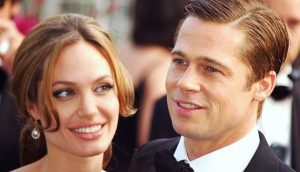 Megastar Brad Pitt is none too happy to find out a group called “Super Happy Fun America” has used his name and likeness as a means of promoting their “Straight Pride Parade” event. In fact, he’s so unhappy he’s decided to threaten legal action against the group for calling him their “mascot.”

Does anyone else find it hilarious that it’s somehow hateful and bigoted to be proud to be straight, but not to be gay? Shouldn’t all people feel proud of who they are? Isn’t that the message of the LGBTQ community?

A source confirmed to The Hollywood Reporter that “Pitt has made it clear to the small group of Boston men planning a ‘Straight Pride’ parade they must stop using the actor’s name and likeness for their purposes.”

Additionally, sources close to Pitt told TMZ that “his team has reached out to the Straight Pride Parade organizers, demanding they stop using his name and likeness for their event,” a report said. “If they don’t do it soon … we’re told further action could be taken.”

“The Straight Community has adopted Brad Pitt as out mascot! Congratulations to Mr. Pitt for being the face of this important civil rights movement,” the site said, according to The Hollywood Reporter. “Straight Rights are Human Rights!”

The site yanked the photo down and redacted post following their “it’s great to be straight” tagline so now it reads like this:

“The Straight Community has adopted [Redacted] as out mascot! Congratulations to [Redacted] for being the face of this important civil rights movement. Straight Rights are Human Rights!”

The Straight Pride Parade event is scheduled for some time in August, though the exact day has not yet been decided upon.

At the end of the day, it’s perfectly fine for Pitt to not be happy about his name and likeness being used for a cause he doesn’t want to support — at least no publicly — because we as conservatives would feel the same way.

Not to mention the fact that his face and name are how he makes money, so if those things are allowed to be associated with causes that could threaten his career, it makes sense to take this sort of action.

What’s truly ridiculous is the fact that a “Straight Pride Parade” is something folks deem to be necessary due to the religious like zeal of the LGBTQ community and their desire to shove their homosexuality off on everyone.