Actor Alec Baldwin Discharges Prop Gun On Film Set; One Dead, Another Injured According to Authorities 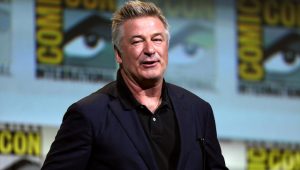 Actor Alec Baldwin, 63, reportedly discharged a prop gun during an apparent accident on Thursday while on set for a new film he’s making, killing one person and seriously injuring another, according to reports from local authorities.

One of the people shot was cinematographer Halyna Hutchins, 42, who was pronounced dead. According to the Santa Fe County Sheriff’s office, the shooting took place at the Bonanza Creek Ranch film set while work for an independent movie called “Rust” was happening.

Joel Souza, 48, who is the writer for the film, was also shot during the incident and has been hospitalized at Christus St. Vincent Regional Medical Center.

Juan Rios, a spokesperson for the sheriff’s office, told the Alburquerque Journal that the apparent movie scene that they were filming “involved the use of a prop firearm,” which discharged. “Detectives are investigating how and what type of projectile was discharged,” he said.

According to the Santa Fe New Mexican, “[a] source close to the investigation said Baldwin, 63, was questioned by investigators late Thursday and was seen by a New Mexican reporter and photographer in tears.”

The investigation remains ongoing, and authorities said no charges have been filed.

“Santa Fe County Sheriff’s deputies were dispatched to the Bonanza Creek Ranch movie set of the western “Rust,” October 21, 2021, when an 911 caller reported a shooting on the set,” a statement released by the sheriff’s office said.

“The sheriff’s office confirms that two individuals were shot on the set of Rust. Halyna Hutchins, 42, director of photography and Joel Souza, 48, director, were shot when a prop firearm was discharged by Alec Baldwin, 68, producer and actor,” the statement read.

“Ms. Hutchins was transported, via helicopter, to University of New Mexico Hospital where she was pronounced dead by medical personnel. Mr. Souza was transported by ambulance to Christus St. Vincent Regional Medical center where he is undergoing treatment for his injuries,” it continued.

“This investigation remains open and active. No charges have been filed in regard to this incident. Witnesses continue to be interviewed by detectives,” the statement said in conclusion.

Leadership for the International Cinematographer’s Guild, Local 600, referred to the incident as “devastating.”

“We received the devastating news this evening, that one of our members, Halyna Hutchins, the Director of Photography on a production called ‘Rust’ in New Mexico died from injuries sustained on the set,” John Lindley, who is the president of the guild, and Rebecca Rhine, serving as the executive director of the guild, went on to say in a statement, according to new reports from Variety. “The details are unclear at this moment, but we are working to learn more, and we support a full investigation into this tragic event. This is a terrible loss, and we mourn the passing of a member of our Guild’s family.”

Let’s say a prayer for both the Souza and the Hutchins family. What an awful tragedy.