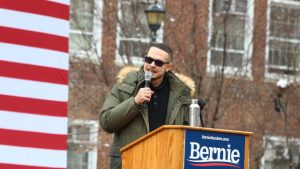 Black Lives Matter activist Shaun King has once again found a way to push himself into the spotlight by making controversial statements, which is basically his only real contribution to society at large.

King is demanding that the Kenosha, Wisconsin Police Department release the name of the officer who shot Jacob Blake, a man with several warrants out for his arrest at the time of the incident, or else have its officers doxxed at random.

You know, that could be construed as a terrorist threat.

King sent out the threat on Twitter late Tuesday as the third straight night of violent riots, looting, and destruction rocked the city. Later in the night, two people were killed and one more was injured after shooting broke out among civilians, according to police. King has roughly 1.1 million followers on the platform.

“To the Kenosha Police Department, if you do not name the officer who brutally shot Jacob Blake on Sunday, we will simply begin naming officers from your department who may or may not be him,” King tweeted. “F*** it. Your protection of his identity is unethical. What’s his name?”

King said in a later tweet that one officer apparently wrongly accused of shooting Blake has been taken into protective custody over threats to his life, and presumably similar action would need to be taken to protect the lives of officers baselessly accused by King as the one who shot Blake.

The Daily Wire reached out to Twitter to find out if what he tweeted is a violation of the company’s policies against threats, but have not received an answer as of this writing.

This is a terrorist threat. No matter which way you try and spin it. King is purposefully trying to put people’s lives in danger as a means of coercion.

Someone needs to stop this nonsense. Now.