Acting Interior Minister For Taliban Might Have American Hostage 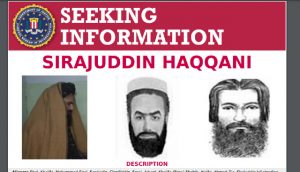 The Taliban, which has taken over the country of Afghanistan, has appointed an acting interior minister who is believed to currently be holding an American hostage and is possibly wanted by the FBI.

Man, this situation over there is getting worse and worse. There’s no way President Joe Biden should get off the hook for this unscathed. He needs to resign or be impeached immediately.

Sirajuddin Haqqani, who is wanted by the FBI for $10 million, is a “specially designated global terrorist” in the bureau’s database. He is believed to be holding at least one American hostage, and he will oversee law enforcement in Kabul, Afghanistan, as acting interior minister, according to Fox News .

“Haqqani is wanted for questioning in connection with the January 2008 attack on a hotel in Kabul, Afghanistan, that killed six people, including an American citizen,” the FBI’s database goes on to say. “He is believed to have coordinated and participated in cross-border attacks against United States and coalition forces in Afghanistan. Haqqani also allegedly was involved in the planning of the assassination attempt on Afghan President Hamid Karzai in 2008.”

Haqqani’s appointment in the new Afghanistan government follows the elevation of other terrorist leaders to government positions by the Taliban on Tuesday. Four of the five members of the “Taliban Five” were given positions in the newly formed government, including Mullah Noorullah Noori as the acting minister of borders and tribal affairs, Abdul Haq Wasiq as the acting director of intelligence, Mullah Khairullah Khairkhwa as the acting minister of information and broadcasting, and Mullah Mohammad Fazil as the deputy defense minister. All four were detained at Guantanamo Bay in Cuba for their connections to acts of terror before being released in a prisoner exchange for U.S. Army deserter Bowe Bergdahl in 2014.

“I will oppose any and all efforts by the Biden Administration to legitimize the Afghan Taliban as the government of Afghanistan,” Graham said in a post on Twitter . “They are a terrorist organization.”

What could possibly go wrong with this cast of characters?

The leader of the Interior Ministry, Sirajuddin Haqqani, has a $10 million dollar bounty on his head offered by the U.S. government because he’s a terrorist.

Biden and his administration absolutely need to be held accountable for this garbage. It’s all their fault. Why in the world would anyone dare approve a mission like this troop withdrawal without first removing the American citizens from the area? It makes no sense.

Here’s to hoping Biden pays for the mess he made and is also forced to clean it up.