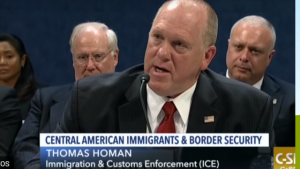 Democratic politicians these days love to get as much camera time as possible to wax emotional about key identity politic talking points instead of, you know, fix the key issues actually facing the security and prosperity of our country.

So when Rep. Nannette Barragan of (you guessed it!) California had a moment with acting ICE director Thomas Homan in a hearing this week, she dramatically lamented to the CSPAN cameras about the terrible tragedy of illegal immigrants being uniformly labeled “criminal” when only a small few really were (kind of like gun owners, Nan?)

Homan, who the folks over at Louder With Crowder say “is known for his bluntness,” wasn’t having it, and tore apart her rhetorical fallacies.

When Barragan mocked how “we love to talk about this issue with MS-13”, and painted those who point out the undeniable crime rates among the undocumented immigrants living in the United States as “anti-immigrant” as if she really truly does believe that there is no difference between an immigrant and an undocumented immigrant, Homan put it her in her place, pointing out that Congress enacted the federal laws that he has been assigned to enforce.

HOMAN: First of all, no one on this panel is anti-immigrant. We are law enforcement officers that enforce the law that you all enacted. So to sit there and say that we’re anti-immigrant is just wrong. We are enforcing the laws. If you think it’s okay to enter the country illegally, and you shouldn’t be arrested, that’s just wrong. The laws clearly state, if you enter the country illegally, it is a crime. And no one is up here saying all illegal aliens are criminals. A certain percentage of them are criminals. They commit yet another offense after they are here. I have said many times I certainly understand the plight of these people, and I feel bad for some of these people, but I have a job to do. I have to enforce the law, and uphold the oath I took to enact the laws enacted by you, Congress.

Well that about sums it up, now doesn’t it?