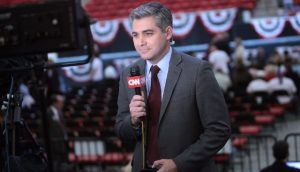 Sparks flew during the White House’s Social Media Summit in the Rose Garden of the White House on Thursday, with CNN contributor Brian Karem and radio host Sebastian Gorka getting into a rather intense verbal exchange that included a challenge from Karem to “go outside.

Of course, CNN Correspondent Jim Acosta, President Trump’s archnemesis, told the events with quite a few of the more important details mysteriously absent from his account, stating the blow-up was because of Trump’s “social media allies” verbally abusing reporters who were “just trying to do their jobs.”

Acosta began his curtailed coverage of the event by taking a selfie and describing the group of social media figures as “Trump’s social media allies,” who, Acosta makes sure to note, are “in the front rows” while all the White House press are “in the back.”

The scene in the WH Rose Garden. All WH press in the back. Trump’s social media allies in the front rows. pic.twitter.com/wi8m4yW53N

The moment from the event that generated the most buzz online was Karem and Gorka’s heated exchange. Acosta, who has consistently portrayed himself as unfairly targeted by the White House, framed the incident as Trump’s “allies” attacking a journalist just there to do his job while White House officials stood by in tacit approval.

“WH officials invited Trump’s social media allies to sit in the Rose Garden. But after the event was over, West Wing aides did nothing when those social media figures began to verbally abuse reporters who were trying to do their jobs. A good snapshot of how press is treated by WH,” Acosta tweeted.

He linked to a video that only shows Gorka calling Karem a “punk” and social media figures cheering Gorka — one predicting Gorka could kick Karem’s “punk a**” — while some of Karem’s fellow “real journalists” complain.

WH officials invited Trump's social media allies to sit in the Rose Garden. But after the event was over, West Wing aides did nothing when those social media figures began to verbally abuse reporters who were trying to do their jobs. A good snapshot of how press is treated by WH. https://t.co/j0Ys542dok

Folks immediately started pointing out that Acosta left out how the whole thing was started by Karem.

“As expected: Starting the clip with Gorka comment without the context of Karem earlier challenging him to a fight. Which is punk. And dishonest on @Acosta ‘s part,” wrote one follower.

Here’s a better angle. Sounds as if Brian Karem was only in attendance to berate Trump supporters. pic.twitter.com/gMhlcL3VDE

Obviously, Karem started the whole thing by not being able to keep his mouth shut and handle himself professionally. His comments were designed to make people angry and to start something. The video evidence speaks for itself.

Guess it shouldn’t be surprising to see someone like Acosta defending one of his own, especially when doing so gives him an opportunity to bash the president and get his face in front of millions of people.

Reporters are supposed to give us the news, not be the news. Apparently, neither Acosta or Karem got the memo.