According to Authorities, El Dorado Fire The Result Of Pyrotechnic Used In Gender-Reveal Party 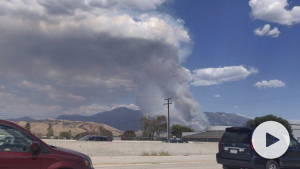 It has been determined that one of the massive 23 fires now burning in the state of California is the result of a smoke generating pyrotechnic device that was used during a gender-reveal party.

The El Dorado Fire, which is currently scorching its way through Oak Glen in San Bernardino County, has forced 3,000 residents to evacuate their homes. The fire has already burned up more than 7,000 acres and as of this writing is only 5 percent contained.

“CAL FIRE reminds the public that with the dry conditions and critical fire weather, it doesn’t take much to start a wildfire,” a Cal Fire San Bernardino Unit statement said. “Those responsible for starting fires due to negligence or illegal activity can be held financially and criminally responsible.”

The fire started at 10:23 a.m. on Sept. 5, in the El Dorado Ranch Park in Yucaipa, located about 75 miles east of Los Angeles, the statement added. It continues to burn on the north slope towards the communities of Mountain Home Village and Forest Falls, reports said.

“It burned in four different directions since we’ve been here. It was pushing to the east, then to the north, and then big westwardly wind shift, and (Sunday) it moved to the south. The wind has been pretty dramatically inconsistent,” said Ben Holmes, a U.S. Forest Service senior firefighter on the Arroyo Grande Hotshots team, according to the station.

How awful do you think these folks feel for starting this bad boy? Yikes.

As you can imagine, folks were none too happy with these individuals and took to social media to let their feelings be known.

One user on Instagram said, “God, this makes me so angry.”

Another individual on Twitter responded by saying, “You HAVE to be kidding. How do people think this is a good time for something like that?”

One of the many reasons that California has this problem every single year is due to government ineptitude. What should be happening on a regular basis, but isn’t, are controlled burns. These would help to prevent these massive wildfires and the horrific destruction they bring with them.

Unfortunately, trying to convince the many eco-nuts in the Democratic Party in the state is night to impossible. Perhaps that has a lot to do with the fact that they would like to use the environment as a means of furthering their sickening socialism and calls for wealth redistribution.

The modus operandi of the Democratic Party is to create some sort of panic or fear about a catastrophe they claim is on the horizon, causing folks to surrender liberty in exchange for security. Unfortunately, the security bit is an illusion. The left knows this, but uses this tactic anyway, hoping the masses never catch on to it. So far, their plan is working.

Here’s to hoping the fire departments are able to get this under control before this fire costs more people their lives and their homes.