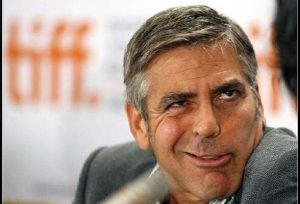 I like to pick on George Clooney because he makes himself an easy target. Admittedly he has come a long way with his acting skills over the years, but I think his mental ability is on a downward spiral.

In a recent interview with the Daily Beast Clooney discussed the possibility of running for office but expressed hope that “anyone” besides Trump will be our next President. He also discussed the basis of his new movie “Suburbicon.”  It’s about a group of white suburbanites angrily protesting a black family moving into their neighborhood in Levittown, PA.

This movie set in the 1950’s is based on a true story and is yet another Hollywood attempt to keep racial tensions tight by keeping a horrible aspect of American history fresh and on the forefront of our minds. What prompted Clooney to tell the story of these mid-20th century racists? Trump and his voters, of course!

“The genesis of the screenplay [came when] I was watching a lot of [Trump] speeches on the campaign trail about building fences and scapegoating minorities, and I started looking around at other times in our history when we’ve unfortunately fallen back into these things, and I found this story that happened in Levittown, Pennsylvania…

When you talk about ‘Making America Great Again,’ America being great everyone assumed was the Eisenhower ‘50s, and it was great if you were a white, straight male, but other than that it probably wasn’t so great. It’s fun to lift up that curtain and look underneath that thin veneer and see some of the real problems that this country has yet to completely come to terms with.”

That’s right!  Clooney got the idea for the racist movie by thinking about Trump supporters.

It is apparently impossible to get it through the thick elitist skull of people like Clooney that racism or racial tension is not what President Trump has been talking about or what Republican voters want!

As Onan Coca has said, “Make America Great Again – is about re-energizing our economy, reasserting our strength on the world stage, and putting America on a path towards progress instead of a path towards the black hole that is European-styled socialism.”

Listen! When Trump supporters say “Make America Great Again” it has absolutely nothing to do with 1950’s suburban racism and has everything to do with the American Dream and growing wealth.It does not matter if you are black, white, or brown…. we want ALL AMERICANS on a path towards prosperity.

In George Clooney’s mind your desire to make America great again simply proves that you are a racist. It’s ideas like this out of Hollywood that are causing Americans to avoid going to the movies in droves.  Meanwhile, Hollywood is trying to find every excuse they can as to why no one is watching their films. Personally I think Americans are sick and tired of having opinions shoved down their throats by left wing mega celebs that have zero grasp on reality.

Clooney doesn’t want or need your racist money so just stop giving it to him.

Making America great is not an evil thing! In George’s mind it’s a racist pursuit. Unfortunately for him however he keeps violating his own arrogantly superior ideals with his own hypocritical personal lifestyle.

Here’s the problem George: Our trend over the last 25 years has been to emulate European culture and secularization. Rather than American exceptionalism we’ve pursued globalization and the result has lowered our standards far below anything that could be compared to greatness. We have also become lazy in how we have monitored entrance into the United States across our very open borders.  The idea that Donald Trump campaigned on tightening the security of America and vetting those who wish to enter our country is not racist. It is wise.

That same European culture that we have mistakenly admired in the last several years is now being overrun with terrorists that seek to do it harm.  Just ask Mr. Clooney who has now evacuated both his Italian villa and his English countryside home out of fear for his family’s safety from Muslim refugees.  Yes! The same refugees for which he has consistently advocated.

Would George define his actions as racist because he is fleeing from people of color? Or would he consider his decision wise and prudent since he has in fact received death threats from Muslims?

Perhaps in moving to Los Angeles and living just blocks from the police department he could say his new motto has become “Make Clooney Safe Again.”  Jeez! What a racist.