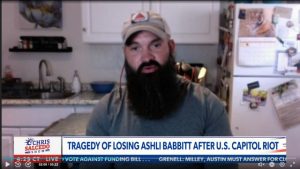 Aaron Babbitt, the husband of slain Jan. 6th protester Ashli Babbitt, recently spoke with Newsmax where he stated that while we’re only eight months into the Biden administration, the U.S. has been setback “years.”

“We’ve gone back five years at this point,” Babbitt said Monday during an interview on “The Chris Salcedo Show.”

“We’re being systematically separated by this administration, starting with race,” he went on to say. The left now have declared “Everybody’s a racist,” Babbitt said. “America’s not a racist nation. They’re just trying to make it a racist nation.”

According to Babbitt, the ploy being unleashed on the country is to get Americans to fight with each other and ignore what liberal politicians are doing in our nation’s capital.

“And then they want to get into your health status and your vaccination status, and if you’re not compliant, you’re compliant,” Babbitt stated. “They’re systematically dividing us as Americans and we need to become one to get back what we have.”

“Ashli Babbitt died after being shot by Capitol Police Lt. Michael Byrd on Jan. 6 when she tried to crawl through a window at the Capitol. An investigation has cleared Byrd of wrongdoing, but her husband has continued to seek an inquiry into her death,” Newsmax reported.