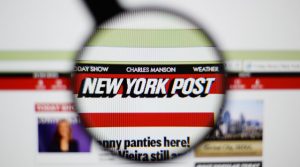 A new report states that after releasing a bombshell report about Hunter Biden over a week ago, the New York Post is still locked out of its Twitter account. The publication was clocked after releasing the story as the social media platform went on a frenzy to try and stop the spread of the story.

This, ladies and gentlemen, is not at all a good look for one of the leading social media companies in the world.

“7 days have passed since the Post published the first story in our Hunter Biden laptop exposé. We still cannot access [The New York Post’s] Twitter account, despite [Jack Dorsey’s] apology,” the Post’s deputy politics editor Emma-Jo Morris tweeted on Wednesday morning, referencing a public apology made by Twitter’s CEO about the way the platform handled the articles’ publishing.

After the initial Post story dropped purporting to show an email exchange between Biden and an executive at Burisma, a Ukrainian energy company, Twitter banned users from tweeting out or sharing the story through direct messages on its platform. The company said that the story violated its prohibition on “hacked material.”

There is no evidence suggesting the emails at the center of the Biden stories were obtained through hacking. The Post addressed the censorship in an Oct. 15 editorial on ripping Twitter’s censorship as a double-standard meant to protect the Democratic nominee for president:

With the flimsiest of excuses, Twitter prevented its users from sharing, even privately, Post reporting that shows Hunter Biden monetized access to his father when Joe Biden was vice president — and its after-the-fact rationale was just as bogus.

Its supposed rules would ban most mainstream journalism in the Trump era. But it’s clear that weeks before the election, CEO Jack Dorsey is interested only in suppressing material embarrassing to the Democratic nominee.

According to the report written by Tim Pearce, “Dorsey apologized for the heavy-handed approach to censoring the story and Twitter executive Vijaya Gadde promised that Twitter would overhaul its “hacked material policy” after the blowback.

Twitter has since lifted the outright ban on sharing this story from the Post about Biden’s scandalous hard drive. However, the Post still remains locked out of its account, supposedly until they remove tweets that Twitter has flagged as being in violation of its policy, which also probably includes the one that contains the report about the emails.

“And we continue to stand by every word of our reporting — and so, apparently, do Hunter and Joe Biden since NEITHER has disputed the authenticity of the e-mails or the ownership of the hard drive,” Sohrab Ahmari, an op-ed editor for the Post, posted on Wednesday.

And we continue to stand by every word of our reporting — and so, apparently, do Hunter and Joe Biden since NEITHER has disputed the authenticity of the e-mails or the ownership of the hard drive. https://t.co/2NYfIafVSl

This is censorship. Plain and simple. The GOP has caved about holding these companies accountable, which is a gross violation of conservative principles. Hopefully, folks like Sen. Ted Cruz can convince them to subpoena the CEOs of these companies and force them to answer for this nonsense.