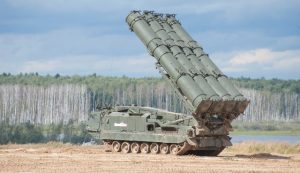 When Russian President Vladimir Putin delivered his announcement concerning the invasion of Ukraine on Wednesday, he stated that if any other nation on the geopolitical stage that dared to get in the way of what he was trying to do, there would be severe consequences which history has not yet seen.

Many individuals immediately took this as a threat of nuclear action against those who actively oppose Russia’s attempt to take over Ukraine. As you can imagine, this has unsettled a lot of people all over the world, especially here at home.

Well, according to Newsmax, a defense official from the government has stated, under condition of anonymity, that they do not currently see an increased threat from Russia’s nuclear forces.

“We don’t see an increased threat in that regard,” the individual said.

Let’s hope this official is really telling the truth, because this whole situation in Ukraine is pretty scary to watch unfold. Especially because we don’t really know what Russia’s plans are beyond Ukraine.

Will Putin attempt to take over other NATO countries? What kind of impact does this move have on the rest of Europe which relies very heavily on Russia for their energy needs?

There are so many unanswered questions.