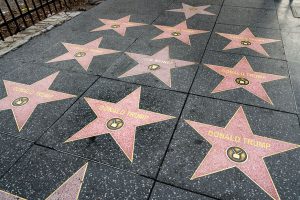 In a world of bizarre, senseless, and meaningless conceptual “art”, here is a large-scale art installation that has layers of meaning.

An anonymous conservative street artist has covered the Hollywood Walk of Fame with Donald Trump stars, following the utterly unproductive and very un-anonymous act of vandalism committed by one anti-Trump supporter who smashed the President’s star to smithereens with a pickaxe last month.

The piece, which the anonymous artist does not appear to have named, giving an added edge to an already daring act of multi-dimensional art, was created using laminate tyles on street concrete.

It is reminiscent of early 20th Century guerilla street art with a refreshing, and utterly unique, twist of MAGA. The blending of such unexpected styles is certainly refreshing and has never been done before.

As a response to the destructive, raw anger of vandalous act that inspired the artist, the piece speaks to the slow but steady rise in Trump’s popularity, from the time he first announced his candidacy to his high approval numbers today.

The repetition of the identical Trump star, which surely must evoke unimaginable vexation in the liberal observer of the piece, seems to echo the famous “nooooooooooo!!!!!!” shouted at the sky from one eternally-viral liberal the moment Trump was inaugurated.

The multitude of stars plastered across the Walk of Fame seems to illustrate the budding conservative movement, fueled by the irresponsible and wild rhetoric the left has been beating America over the head with, much like the pickaxe wielded by the Trump star vandal.

The attack on the Trump star represents the political correctness and intersectionality that had been destroying our society, only to be plastered over by Trump’s refreshing and far more sensible ability to say what we’d all been thinking.

It’s as if in every star you can hear the voice of a red-blooded American patriot saying “MAGA, Mr. President, MAGA.”