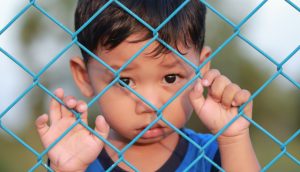 The boy standing of pulling a metal fence .

About 25 percent of the migrants that have been dropped off in a Texas border town have been found to be COVID-19 positive, according to the director of the homeless shelter where Border Patrol agents are currently releasing illegal immigrants they are catching.

Bill Reagan, shelter director, recently told the Harlingen City Commission during a meeting that there’s not much that can be done, saying “We can’t quarantine them. Even though they test positive, they’re going to leave the next day. They’re going to get on the bus or the airplane, and they’re gone.”

The migrant surge, as well as the difficulties dealing with it, especially with the coronavirus, is occurring in other such border communities, with NBC News reporting similar circumstances in Brownsville, Texas.

Local officials in Arizona told The Washington Times that they don’t have the capacity to test the migrants for COVID-19 or house them, and nonprofit groups were either not equipped or also did not have that capacity.

Reagan said that, in any case, the testing itself “is really almost useless because these folks have been in detention together, they’ve been in close quarters under difficult circumstances for weeks sometimes, they’ve been brought together on the bus. Some folks who test negative may have recently been exposed.”

All of this is Biden’s fault. He was in such a hurry to erase former President Donald Trump’s legacy that he never stopped to think whether or not the policies that were in place were good for the country or not.

He wanted to remove anything he did while in office. And now folks at the southern border are going to be paying the price for it. Economically and health wise.