A Liberal Reporter Wore A MAGA Hat To A Vegan Restaurant In LA. Here’s What Happened 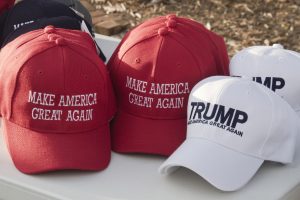 MAGA hat attacks are nothing new, but no less shocking.

When the loving, tolerant, inclusive left is assaulted by the mere sight of that red beacon of bigotry, some wires come loose in their brains and they absolutely lose it. Even elderly men, children at school, and peaceful pedestrians make themselves fair game if they dare to wear a MAGA hat outside the safety of their own homes.

In a commendable display of critical thought, however, an unapologetically liberal writer for Los Angeles Magazine conducted a little social experiment to test Trump Derangement Syndrome (TDS) in the field.

Writer Joel Stein admitted to experiencing TDS himself, something he’s certainly not proud of:

The anger is so ubiquitous that even I’ve been infected. I saw an elderly man walking toward me on the Ferndell Trail in Griffith Park wearing a red hat, and I hate-stared him until he got close enough that I could see it had a USC logo on it. I avoided talking to a nice dad at my son’s old school because there was a rumor that he voted for Trump.

However, after researching “political tribalism” in America, Stein came away with a markedly different opinion of his fellow Americans on the opposite side of the spectrum. After visiting Trump supporters in Miami, Texas, Stein was shocked to find that they were—gasp—nice people. Some even “fed [him] in their homes or paid the server before our check arrived.”

This stunning revelation caused Stein to look inward at himself and his own leftist comrades when examining the issue of politically-motivated hatred:

I worry that my side isn’t as friendly. We’ve harassed politicians out of restaurants, chanted threats outside a Fox News anchor’s home, and gone off on me for asking other parents if putting on a play about Native Americans despite the fact that there are no Native Americans in our school is really that evil.

No argument here, brother. In fact, if y’all weren’t so crazy I might have to switch to writing about knitting or gerbil breeding or something exciting like that.

In consideration of the TDS-induced hysteria Stein notices in the blue camp, he plotted to test the results of wearing a Make America Great Again hat in LA’s most rabidly leftist restaurant: Café Gratitude in Larchmont. Stein describes the eatery as a “vegan hipster restaurant” so liberal, when they attempted to sell a “Make America Grateful Hat,” customers complained that they were taking President Trump’s evil message too lightly. Seriously.

Stein then bought himself a knock-off MAGA hat on Amazon because “the hate is so strong in [him]” that he found it “more ethical to support the Chinese government than Trump.” Again with the hate, buddy? The Chinese government is one of the greatest abusers of its citizens’ basic human rights (and I mean actual human rights, like the freedom to have children or practice your religion or personal beliefs) yet Trump is somehow more evil than that? Come on, now.

Anyway, now being in possession of one of the most hated symbols of our era, Stein became a little bit nervous. Recalling an incident back in 2011 in which a guy was beaten into a nine-month coma for wearing a San Francisco Giants hat to a game at Dodger Stadium, Stein began contemplating his own fate should he follow through with wearing the MAGA hat to Café Gratitude.

I don’t think most actual Trump supporters need to worry about a gaggle of soy-powered vegans physically overpowering them, but Stein was very worried.

When he actually did the deed, though, Stein was very pleasantly surprised to find that folks on his side don’t actually hate Trump supporters as much as he seems to:

I glanced around the room, and no one gave me a dirty look. No one walked up to yell at me about Charlottesville or caged children. The guy with the ear twig pulled out a newspaper called the SJW, which I figured was a publication for Social Justice Warriors until I looked again and saw it was The Wall Street Journal.

Before I left, I asked the black waiter, Darick Thomas, how he felt about my hat. ‘I don’t care. At all. Really. At all! I look at a hat and that doesn’t tell me who the person is,’ he said. ‘I’m not against Trump. He says some smart things; he says some dumb things.’

Stein reports that nobody “hate-stared” him or screamed at him for hating brown people. In fact, only one person expressed any disapproval of his headgear, a guy who asked an employee at the counter if “that guy” was wearing a “f***ing MAGA hat.”

Rather than reconsider his own hatred and see it for the unacceptable bigotry it is, Stein laments that “the far right has become so normalized that no one said anything to a guy in a MAGA hat at Café Gratitude” and says he is “Not Sure How Great That Is.”

If this is where leftism is headed, mourning that the “tolerant” left is actually being tolerant, I don’t think folks like me will run out of things to write about any time soon.