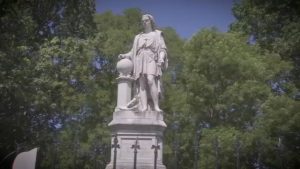 No doubt politically correct liberals are foaming at the mouth with pure, unadulterated rage this morning, as a judge has ruled against the removal of a Christopher Columbus statue in the southern part of Philadelphia, which city officials had already decided to move.

Common pleas court Judge Paula Patrick said the decision by city officials was not supported by the law and was baseless because of insufficient evidence.

“It is baffling to this court as to how the City of Philadelphia wants to remove the Statue without any legal basis,” she stated in her written decision. “The city’s entire argument and case is devoid of any legal foundation.”

The city’s Board of License and Inspection Review had initially upheld a July 2020 decision by the Philadelphia Historical Commission to remove the statue.

However, the city did not provide an adequate opportunity for the public to weigh in on the statue’s future, Patrick said.

The Columbus effigy became a topic of debate following the civil unrest that followed the murder of George Floyd .

“While we are very disappointed with the ruling, we’re reviewing it now and exploring all potential options — including a possible appeal,” a spokesperson for Mayor Jim Kenney responded to the ruling. “The statue remains in Marconi Plaza and will continue to be secured in its existing box.”

Kenney’s chief of staff had spoken with the city’s Art Commission and informed them the statue had to be removed because of public safety.

The judge went on to say in her ruling that the city did not provide adequate evidence to support the idea of the statue posing a threat to the safety of the community.

This has nothing to do with public safety and everything to do with attempts by liberals to rewrite the history of the Western world. They want to destroy all of this in the name of not being offensive to others.

Only problem with that kind of thinking is that it’s impossible not to offend someone somewhere. And there’s nothing offensive about knowing our history and understanding the fact that even our “heroes” were still just people who were flawed and sometimes did bad things.