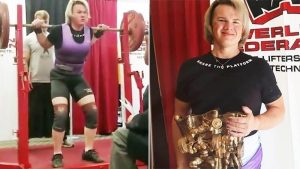 I have to tell you, there’s a little bit of a “kumbaya” element any society needs in order to be peaceful and prosperous. Different strokes, you know?

In today’s America, though, simply peaceful, respectful coexistence isn’t enough. The practice of “tolerance” has long been replaced with “acceptance” which is already being rendered obsolete by “celebration”. It’s not enough to merely live alongside your neighbor who prefers to wear dresses while he mows the lawn—you need to affirm him in doing it. And you need to stop calling him “him”, you filthy bigot, you.

All manner of amateur forensic historians like to pinpoint exactly when the decay—not just the decline—of Western civilization began. I can’t give an answer for that, but I can definitely tell you the process is speeding up now that rationality, biology, and science are being muscled out of the public square in favor of feelings, preference, and experience.

Case in point: the invasion of women’s sports by biological male “trans women”. This is a scenario no one on earth before the last couple of generations could ever have imagined, but it’s happening. Careers are being made and broken over it, society is grappling with it, and, well, I’m writing about it.

When men who were born male, live their whole lives as such, experience male puberty (and, along with it, a series of carefully designed physiological changes unique to their sex), and then up and identify as a woman later in adulthood, it stands to reason that they have a hideously unfair advantage against their biological female competitors.

I can’t believe that sentence even needs to be said. But, apparently it does, and a handful of female athletes are speaking up and saying it.

Even some of the staunchest LGBT advocates in the world of sports can see the problem here.

Although she wholeheartedly affirms transgender talking points, Navratilova has rationality enough to draw the line at allowing men to compete against women, especially where careers and livelihoods are on the line. For her trouble, she was promptly ousted from her spot on the board of Athlete Ally, a non-profit organization fighting for the inclusion of LGBTQIAWXYZ athletes in sports.

Just last week, after a transgender person who calls themselves Mary Gregory shattered a handful of women’s weightlifting records and won the 100% Raw Weightlifting Federation competition, even more actual female athletes stepped up to speak out against the insanity.

Sharron Davies, an Olympic medalist, has long been an outspoken critic of allowing men to participate in women’s sports. While she also is an ardent LGBT+ supporter, she devotes much of her social media activity to speaking out against the demise of women’s sports. Sensing a pattern here, anyone?

After Gregory won the powerlifting match, Davies wasn’t having it:

This is a trans woman a male body with male physiology setting a world record & winning a woman’s event in America in powerlifting. A woman with female biology cannot compete.. it’s a pointless unfair playing field. https://t.co/sI9i3AFANB

Its a bloody joke and all getting ready for biological women to boycott certain events.Have a trans category if need be but even better a trans games.Otherwise i’m starting to worry about the backlash and abuse that the trans community will get from spectators. It will happen!

Davies also added that the records Gregory supposedly set should be disregarded, not unlike our treatment of steroid-users and cheaters who win competitions:

Any records set by trans woman ( those born males with male biology & advantages) should be removed when all of this confusion & unfairness is sorted out .. otherwise just like the cheating world records of the testosterone fuelled East Germans they will stand for years

Of course, the biggest push for equality is the statement that “trans women” are in fact biological women. Once more, Sharron’s not going along with it:

I support anyone’s right to socially live peacefully as they’d like. Not harming others. BUT sport is biology based/sensitive & at top level especially, an active Y chromosome will bring unfair unlevel benifits through and after puberty race by sex not gender, they are different

Davies openly lamented the certain doom of women’s sports this insanity will lead us to:

No surgery required today .. no hormones… no medical diagnosis.. just self ID & reduced testosterone to a level x5 the highest average (98%) of XX females.. far worse than most realise. Madness & unfair

After the massive backlash sparked by Gregory’s powerlift performance, the 100% Raw Federation finally stepped in to set the record straight:

Fantastic response from Raw Power Lifting Federation. A trans woman competed without advising of their trans status but their lifts will not rob a female competitor of a place, title or record. A trans category will now be created and female power lifting remains for females 💪💪 pic.twitter.com/aMuOu4zJc0

Their report explains that Gregory entered the competition according to his “identified” gender, not his biological one, breaking their current rules ahead of the creation of a Transgender division. As a result, any records set by Gregory are officially revoked.

Davies and others praised 100% Raw for their decision, but this was just one victory in the culture war. Transgender athletes continue to muscle women out of their own sports division, all amid thunderous applause from the inclusion mafia.