Let’s Be Fair! Democrats Have Given Us A Lot of Contributions to American Society 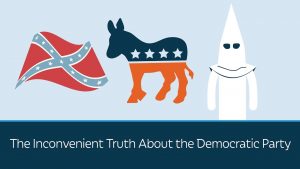 Someone sent me a message and said that I’m not being fair to democrats. They let me know that my narrow minded ways of thinking would not allow me to see all of the good and lasting contributions democrats have given American society. Hmmm.

Well then…let me be fair. Democrats have contributed a lot of things to American society! Let’s look at a few.

As Carol Swain, professor of political science and law at Vanderbilt University says, when you think about racial equality and civil rights, which political party comes to mind? The Republicans? Or, the Democrats?

Most people would probably say the Democrats. But this answer is incorrect.

Since its founding in 1829, the Democratic Party has fought against every major civil rights initiative, and has a long history of discrimination.

In contrast, the Republican Party was founded in 1854 as an anti-slavery party. Its mission was to stop the spread of slavery into the new western territories with the aim of abolishing it entirely. This effort, however, was dealt a major blow by the Supreme Court. In the 1857 case Dred Scott v. Sandford, the court ruled that slaves aren’t citizens; they’re property. The seven justices who voted in favor of slavery? All Democrats. The two justices who dissented? Both Republicans.

The slavery question was, of course, ultimately resolved by a bloody civil war. The commander-in-chief during that war was the first Republican President, Abraham Lincoln – the man who freed the slaves.

During the era of Reconstruction, federal troops stationed in the south helped secure rights for the newly freed slaves. Hundreds of black men were elected to southern state legislatures as Republicans, and 22 black Republicans served in the US Congress by 1900. The Democrats did not elect a black man to Congress until 1935.

But after Reconstruction ended, when the federal troops went home, Democrats roared back into power in the South. They quickly reestablished white supremacy across the region with measures like black codes – laws that restricted the ability of blacks to own property and run businesses. And they imposed poll taxes and literacy tests, used to subvert the black citizen’s right to vote.

And how was all of this enforced? By terror — much of it instigated by the Ku Klux Klan, founded by a Democrat, Nathan Bedford Forrest.

As historian Eric Foner – himself a Democrat – notes:

“In effect, the Klan was a military force serving the interests of the Democratic Party.”

President Woodrow Wilson, a Democrat, shared many views with the Klan. He re-segregated many federal agencies, and even screened the first movie ever played at the White House – the racist film “The Birth of a Nation,” originally entitled “The Clansman.”

A few decades later, the only serious congressional opposition to the landmark Civil Rights Act of 1964 came from Democrats.

And when all of their efforts to enslave blacks, keep them enslaved, and then keep them from voting had failed, the Democrats came up with a new strategy: If black people are going to vote, they might as well vote for Democrats. As President Lyndon Johnson was purported to have said about the Civil Rights Act, “I’ll have them n*****s voting Democrat for two hundred years.”

So now, the Democratic Party prospers on the votes of the very people it has spent much of its history oppressing.

Democrats falsely claim that the Republican Party is the villain, when in reality it’s the failed policies of the Democratic Party that have kept blacks down. Massive government welfare has decimated the black family. Opposition to school choice has kept them trapped in failing schools. Politically correct policing has left black neighborhoods defenseless against violent crime.

So, when you think about racial equality and civil rights, which political party should come to mind? Thanks demoncrats.