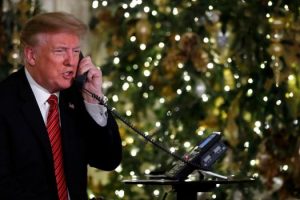 I have apparently learned absolutely nothing in 2018, because I oh-so-naively thought that Christmas Day would be quiet in the news.

How silly I felt to settle down in front of my news feed Wednesday morning to discover that the media had found plenty to complain about on Christmas Day, including over-interpreting a comment Trump made to a 7-year-old about Santa.

Well, it was nice to get a day off from this crap, I’ll tell ya that.

So, if you’re still enjoying your holiday and somehow missed it, what happened was that a 7-year-old who called NORAD on Christmas Eve to see where Santa was happened to get to speak to the President directly.

“Are you still a believer in Santa?” Trump asked Collman Lloyd of Lexington, SC. “Because at 7, that’s marginal, right?”

Donald Trump, answering phone call from 7-year-old on Christmas Eve: "Are you still a believer in Santa? Because at seven it's marginal, right?" pic.twitter.com/VHexvFSbQ1

You’d think that maybe, just maybe, we could all have a good hearty laugh over how hilariously Trumpian this moment was and enjoy Christmas in the greatest nation on earth.

No such Christmas miracle was in sight though, as the media pundits got to work over-interpreting and revving up hysteria over this funny little exchange before their kids even woke up on Christmas morning.

At least he wasn’t locking them up in cages, they said.

Folks, this kid will be fine…it’s not like he’s locked in a cage or dead after attempting to seek asylum. https://t.co/riPGvt3KxB

Considering everyone is back at work today, there’s likely more whining and psycho-analyzing and possibly even calls for impeachment on the grounds of ruining the magic of childhood to come.

But, as it turns out, little Collman actually had an awesome Christmas and her belief in Santa has been left unscathed by the President’s remarks:

But to his critics’ disappointment, it turns out that the president didn’t actually do to Santa what Griffin did to him for little Collman. In fact, he appears to have made her Christmas that much more special.

The Post and Courier talked with Collman about the viral call and learned that she still believes in Santa and that she clearly appreciated having the chance to speak with President Trump.

Around 6:30 p.m. on Christmas Eve in her home in Lexington, SC, Collman, curious about where Santa was currently dropping off presents, called NORAD’s Santa Tracker. A scientist answered the hotline and asked Collman if she wanted to talk with President Trump.

“He has a lot to do on the night of Christmas Eve,” Collman said of Trump, who was helping man the phones alongside Melania for a while.

“Are you still a believer in Santa?” Trump asked.

“Yes, sir,” she said, admitting to the outlet later that she wasn’t exactly sure what “marginal” meant.

“She didn’t know it, but his comment about her age being marginal — and her response — would spark national news stories that night and the following morning,” the Post and Courier reports.

While she didn’t end up actually learning where Santa was flying at that moment, she was glad she had a chance to talk to the president. “I was like, ‘wow.’ I was shocked,” said Collman. “It wasn’t really (nerve-wracking), I just had to think of what the truth was.”

If a 7-year-old can get over being teased by the President for believing in Santa, you’d think a bunch of grownups could get over it too.

Apparently, we just don’t live in that kind of world anymore.