573 Days and Counting: Neal McCoy faithfully leads Americans in the Pledge of Allegiance 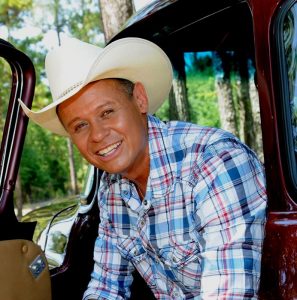 If you think patriotism is dead and gone, think again. You will find it is alive and well in Longview, TX and whatever part of the country you find legendary country crooner and all around entertainer, Neal McCoy. He’s happy to tell you all about it every morning on Facebook and then lead you in the Pledge of Allegiance.  He’ll be doing it this morning, and tomorrow morning, and the morning after that just like he has done for 573 straight days.

That’s right! For over a year and a half now Neal McCoy has been leading America in the Pledge of Allegiance every morning via Facebook Live, and from the looks of things, he has no intention of stopping anytime soon. On occasion he’s even asked a few of his fellow country stars to join in. Tim McGraw, Brad Paisley, and Charley Pride have said the Pledge and also Mr. Las Vegas himself, Wayne Newton.

The morning pledge has been viewed tens of millions of times and fans across the country join Neal religiously every morning and won’t start their day until they pledge allegiance to Old Glory waving faithfully over McCoy’s shoulder on the pole at his Longview home.

McCoy began promoting the Pledge by writing it on his Facebook page each day but then shifted to the video format.  The results have been phenomenal with an audience that sometimes reaches over 100,000 in one morning alone. 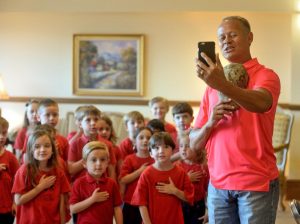 Neal McCoy leads a group of kindergarteners in the Pledge of Allegiance via Facebook Live video.

Most know Neal McCoy for his country hits “Wink,” “No Doubt About It,” and “Billy’s Got His Beer Goggles On.”  He has most recently released his widely received tribute to the American Songbook “You Don’t Know Me,” which is a deviation from his typical, charismatic country sound.

If you need a fresh dose of patriotism mixed with real talk and down-home humor, get up this morning, and every morning after that, fix your coffee and join Neal McCoy on Facebook for the Pledge of Allegiance. As he says every day, “Say it. And mean it.” 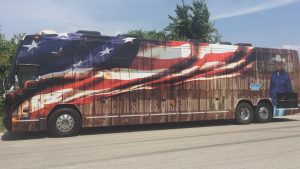 If on the road touring, you can often see McCoy say the Pledge in front of his patriotic tour bus.

“I pledge allegiance, to the flag, of the United States of America, and to the Republic, for which it stands, one nation, under God, indivisible, with liberty and justice for all.”