OPINION: Scaramucci Tenure May Be Brief 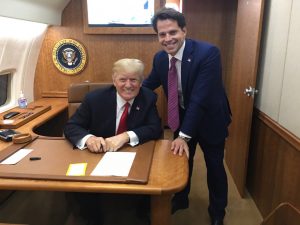 Scaramucci and President Trump on Air Force One

At what point do you say “Enough is enough? Has Communications Director Anthony Scaramucci worn out his welcome at the White House in only one week?

Usually when someone begins a new job they attempt to be on their best behavior.  Apparently that’s not the case for Scaramucci.

Anthony Scaramucci has been on the job as Director of Communications for just over a week with the assignment of getting the White House communications department back on track.

Scaramucci was brought on board to find and fix the obvious leaks emanating from the White House but rather than focus on the task at hand he’s spent a large part of his time insulting key members of the president’s staff, speaking to reporters with vulgarities on par with an adolescent playground bully, and posted numerous pictures of himself in lofty settings like Air Force One.

Scaramucci and President Trump on Air Force One

It’s no secret that Scaramucci was hired because of his New York City bravado and abrasiveness and his ability to get things done efficiently. These are all “Trumpian” qualities that the chief executive obviously values. However, in just a week Scaramucci has managed to do a lot of damage…quite efficiently.

He stated that it is a short matter of time before Priebus’ resigns. Even President Trump has made reference to Priebus being weak, and has alluded to firing him.  It was Priebus that had blocked Scaramucci from joining the White House staff earlier this year.

Scaramucci has also made reference to Trump Senior Advisor, Steve Bannon in descriptive terms that don’t bear repeating in this article.  You can read it here.

Scaramucci has defended his strong attacks with a recent tweet saying, “I sometimes use colorful language. I will refrain in this arena but not give up the passionate fight for @realDonaldTrump‘s agenda.  #MAGA”

I sometimes use colorful language. I will refrain in this arena but not give up the passionate fight for @realDonaldTrump's agenda. #MAGA

Scaramucci told Fox and Friends, Ainsley Earhardt, “I’m a Wall Street guy.  I’m more of a front stabbing person.”  He’s also said that he will “fire everybody” at the White House in order to get to the bottom of the leaks.

Will this bully mentality, win at all costs attitude, work to seal up the leaks or will it further damage the White House? If this is his behavior after only one week on the job I’m not sure it’s going to get much better.

Remember that Anthony Scaramucci was a strong supporter of Hilary Clinton and also Barack Obama. He joined Gov. Scott Walker’s campaign for president and then joined Jeb Bush after Walker dropped out of the race.  His checkered past allegiances could leave one to wonder where his loyalties truly lie.

It would seem that his loyalty is to Anthony Scaramucci alone.