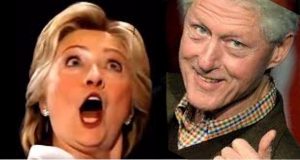 It’s been a rough 12 months for Grandma Never-Gonna-Be-President. First she lost to Donald Trump. And let me repeat that, because it always makes me smile: Hillary Clinton lost to Donald Trump.* LOL! Then she wrote a book about it, and everybody made fun of the title What Happened. Which is dumb because it’s their fault she lost, not hers. Now, all the booze in the world won’t kill the pain. And she can’t even appoint herself President of the Environment, because that’s Al Gore’s job. Life has been unfair to Hillary Clinton!

The roughly 10,000-square-foot East Hampton, N.Y. property is on 1.25 acres with 200 feet of ocean frontage. It contains eight bedrooms, all of which have en suite bathrooms, a formal dining room and six fireplaces…
The identity of the buyer has not been determined.

Sounds like a cozy little shack. Note to the unidentified buyer: Hire a hazmat team to completely disinfect Bill’s room. 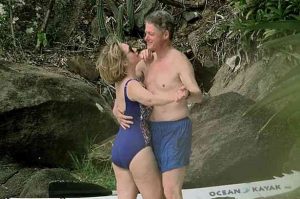 With so much human misery in the world, it warms my heart to see something good happen to those two lovebirds. Now I’d just like them to go away.

*Norm Macdonald has a great theory about why this happened: “People hated Hillary Clinton so much that they voted for someone they hated more than Hillary Clinton in order to rub it in.”