Is CNN an Alt-Right Tool?

Sexism is one of the day’s biggest topics, and no one has covered its many offenses more vehemently and self-righteously than CNN. From expos’es on pay gaps to ad nauseum coverage of  woke women and beta “males” flooding the streets in vagina headgear, the left’s biggest apologist, cheerleader, and champion in the media has been right there to make sure the world knows the urgency of today’s world-ending-cause-of-the-week. That makes CNN’s slap in the faces of women everywhere as disturbing as it is shocking.

In a move no one saw coming, CNN showed their true colors today on their website with the description of a video clip that ran earlier on their network. Because the idea of CNN spewing such hate and intolerance is so unbelievable, a picture of the offending caption is included below. 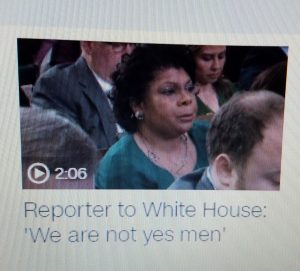 In using the patriarch-affirming phrase “yes-MEN” to describe April Ryan’s comments, CNN’s staff inadvertently flashed their warts to the world. Women, according to these misogynists, have no place in the news world. Some might say such a conclusion reads too much into the innocent use of a popular colloquialism and condemning the network for its lack of tolerance is taking things too far. However, CNN and their leftist patrons have worked hard to eliminate commonsense and reason from the national conversation. Not calling out their hate would be insensitive.

Also, watching the video clip reveals the depth of CNN’s depravity and leaves no doubt as to their intent. Nowhere in her remarks does Ms. Ryan use the words “yes-men”. Not even once. If she had, some defense, however weak, could be made that the reporters and editors were simply providing accurate coverage of Ms. Ryan’s remarks.

The phrase still would have been triggering, but at least we could see some reason in its use. Instead, in what might have been a Freudian slip but more likely was an assault on anyone who was born or identifies as a woman or a non-male, CNN used its heavy hand to wipe out decades of progress the left has made turning men into the weaker sex. Everyone at CNN from Jeff Zucker, the company’s president, to the most recent unpaid intern should feel shame and unrelenting remorse for behaving in a way normally seen only in alt-right circles.

As a side-note, Ms. Ryan, of American Urban Radio Networks and a CNN political analyst, was berating the Trump administration for what she sees as efforts to suppress freedom of the press. Surprisingly, an internet search found no record of similar remarks from Ms. Ryan, a veteran journalist, regarding President Barrack Obama’s Multi-Market Study of Critical Information Needs which would have put FCC “researchers” in newsrooms across the nation to challenge reporters and editors over which stories ran and which ones were canned.

Likewise, no complaints by Ms. Ryan could be found about actions taken by the Obama DOJ against Fox News Chief Washington Correspondent James Rosen, even though journalists from all across the spectrum spoke out against the attack when his and his parents’ phones were tapped. Nor were any results available for her remarks about the same DOJ seizing phone records from the Associated Press. No one can doubt, however, that she stood just as firmly against the Obama administration’s overt assault on the First Amendment.

Though protests, marches, and boycotts are sure to follow CNN’s heinous action, no dates, times, or logistics are yet available. Follow Political Cowboy to keep up with future developments.