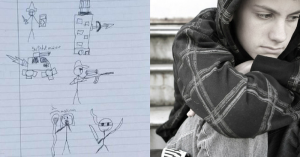 Someone please explain to me why we can’t arm our teachers, but we can punish boys for simply being boys.

While we’re at it, please explain to me why the Parkland shooter and countless other juvenile delinquents across the nation get zero punishment for violent crimes while children with no history of discipline, let alone criminal behavior, are suspended for innocent doodles.

Here’s what went down: in Roseboro, NC recently, a middle schooler was suspended for two days for drawing ninja turtles with swords and a stick figure aiming a rifle. There were no acts of violence portrayed in his artwork nor did the student express any violent desires or behavior.

But you’ve got to bear in mind that to the no doubt liberal school administrators who decided to punish him for his free expression, weapons are animate objects that hunt down and kill people and…people should be punished for drawing them…I guess.

The Rutherford Institute, who is now acting on behalf of the student, shares the story:

After finishing his assignments and waiting for the rest of his class to finish, a 13-year-old student at Roseboro-Salemburg Middle School began doodling on notebook paper. He drew stick-figures that included a Ninja Turtle holding swords in each hand, another stick figure aiming a rifle, a souped-up car, a magician, and a tower with a bow and arrow. Nothing in the drawings depicted violence toward any person. When the classroom teacher saw the drawings, they were confiscated and the student was taken to the principal’s office. Once there, the student, who had not been subject to discipline previously, was suspended for two days. School officials did not warn the student or consult with the student’s parents before imposing the suspension.

The Rutherford Insitute notes that while suspensions for first offenses are allowed according to the school handbook, there is simply no evidence indicating this young man had any intention of even expressing a desire to commit violence.

They also argue that this is a clear violation of the boy’s First Amendment right, something perhaps the anti-gun Parkland students would like to take not of considering they are such big fans of the Fourth Amendment after being told to wear clear backpacks to school.

In fact, it would do each and every American school child some good to familiarize themselves with all the Amendments, while we’re at it, but I digress.

The point is that the American left now has it so twisted that they will punish the drawings of well-behaving students while letting poorly-behaved, criminal students off the hook for legitimate crimes.

They will blame the weapon all day, even to the point of punishing drawings of a weapon, but will make excuses all day long for actual delinquency that sorely requires firm discipline.

Either way, school administrators are failing students. To punish them for innocent actions or fail to punish them for severe ones is a complete breakdown of the entire system of justice for the next generation. Children rely on adults to guide them through life, and when the adults put in authority over them are sending mixed signals about the consequences to one’s actions, they will grow up unable to make appropriate adult decisions.

Pray for our children, folks. That’s all I can say.